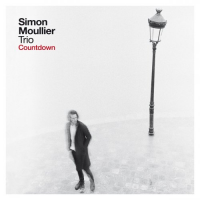 Simon Moullier declares that one of his goals with his second recording is "to make the vibraphone disappear." To this end, he eschews the colorful guest list of his debut Spirit Song (Outside In, 2020) and puts his instrument at the head of an acoustic trio where it gets to fill out most of the melodic space. Perfectly logical, no?

Nevertheless, although his unpretentious virtuosity carries the day on Countdown, it is not too hard to grasp what he means. He elaborates that the point is "to transcend the instrument—always with the flow of expression being the priority." Sure, there are a whole lot of vibes on this session (not to overlook a cracking rhythm section), but more important is the sound of a trio imbuing some ageless standards with their own beautiful sound and shape.

Melodicism is one obvious common quality of the pieces chosen, which Moullier handles with the grace of a bird. His mallets dance across the plates as quickly and smoothly as fingers on piano keys. The opening title track rushes and tumbles with all the crazy velocity of John Coltrane's original, and the feeling stays through almost the whole set. "Nature Boy" and "The Song Is You" go especially brisk, bright and slinky. Tadd Dameron's "Hot House" is downright blistering, while "Turn Out the Stars" is a toe-tapper more jaunty than Bill Evans probably ever played it.

With some of the tracks laid down in a session the week after the recording of Spirit Song and the remainder made during the uncertain early days of Covid-19, it's no surprise that there should be a certain fervor behind everyone's playing. The trio's longstanding familiarity makes for a hot chemistry as well, and they channel that nervous energy through an easy rhythmic rapport which makes everything fly. While the bass lines are as beautifully fluid as those of the vibes, rhythm plays a part just as important as they all skip and hop in step. A couple of dreamy moments in "Goodbye Pork Pie Hat" and "Beijo Partido" ease up the flow just enough in the right spots.

In the end, it's surprisingly easy not to particularly notice the vibraphone or (any individual element) after all. This homage to some of jazz's instrumental pioneers reflects all their original angles while fitting cozily in a sonic space all its own. If that sounds striking in both ambition and humility, well, that's Simon Moullier for you. After kicking off with two such vastly different outings, it will be fascinating to see what sideways step he decides to take next.

Countdown; Work; I Concentrate on You; Goodbye Pork Pie Hat; Nature Boy; Turn Out the Stars; The Song Is You; Beijo Partido; Hot House; Ask Me Now.