Maximize your visibility at All About Jazz by upgrading your musician page from standard to premium. With it, you'll receive All About Jazz home page exposure, a highly stylized / ad-free musician page with bonus features and benefits, an ad, plus you control where you sell your music and so much more.
Learn More
28

BY MARC DAVIS
September 4, 2014
Sign in to view read count 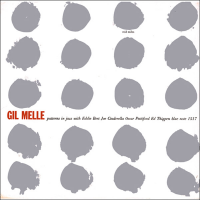 Often, the Blue Note catalogue is predictable, especially in the '50s and '60s. Some say it is too predictable. But if you dive deep, there are hidden gems slightly off the beaten hard-bop path.

West Coast jazz was never at home at Blue Note. Stan Getz and Dave Brubeck did not record here. But Gil Melle did, briefly, before he went on to composing movie soundtracks. The name may be unfamiliar, but this 1956 album is definitely worth hearing.

The instrumentation is odd. There's no piano, but a Wes Montgomery-ish guitarist named, curiously, Joe Cinderella. There's no trumpet, but a cool trombone. And, of course, the Melle baritone (and sometimes tenor).

The CD has only six songs, but they total 40 minutes. It's mostly relaxing, head-bopping stuff. One track, "The Arab Barber Blues," could easily be a Brubeck tune, complete with the dry-martini Desmond sound. Another track, "Weird Valley," has no apparent connection to Ellington's Warm Valley, but still a lazy, pleasant tune.

All in all, Patterns in Jazz is an intriguing album that grows on you with each re-hearing. And definitely not the same-old Blue Note thing.

A note on pricing: Anything by Gil Melle is pretty rare, on LP or CD, so you'll pay $45 or more for this CD, used. I grabbed the $5 MP3 Amazon download instead. Maybe someday I'll spring for the whole shebang, to get the liner nuts and whatnot. Or maybe even buy Melle's Complete Blue Note '50s Sessions for $34. For now, the MP3 is nice enough.