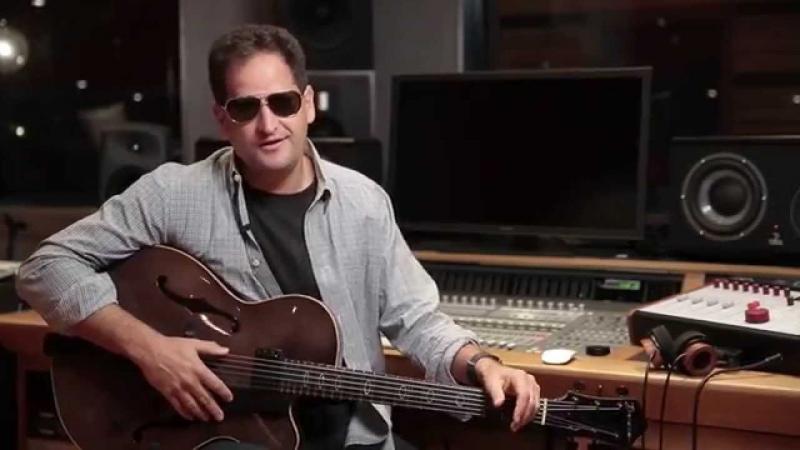 BY PAUL NASER
July 11, 2018
Sign in to view read count
New York based guitarist/composer/ songwriter Gideon King is no stranger to the city. Growing up there, he is well positioned to tell a story or two about the place. This is just what he sets out to do with his forthcoming release with his band City Blog, entitled Upscale Madhouse. Far from a condemnation, the title is his King's way of hinting at the subject matter of the record, which deals with real stories as well as the general energy of the New York City and it's people.

I spoke to King via telephone and asked him about his influences, the incredible roster of players on the record and the ethos of the album, among other things.

Gideon King: I grew up in New York City, and I grew up hearing jazz because of my brother. My brother is a great jazz pianist and I was lucky enough to have him as an influence and was lucky enough to have someone introduce a 5 year old kid to jazz phrasing and thinking about music through the prism of jazz. My sisters were more into the Neil Young, Bob Dylan, Jim Morrison mode. I grew up with a pretty eclectic input into my musical veins.

Yeah, I grew up in New York City, started playing guitar when I was a little kid, probably 7 to 10 years old, then ultimately went to college out in Chicago at NorthWestern where I was an English major. My mother was nice enough to buy me a semi-hollow body guitar and an electric guitar so I could sit alone in my room and fiddle around playing over jazz tracks and blues tracks.

AAJ: That's interesting, that sheds some light on where some of your lyrical and musical influences come from. Your lyrics have some complexity and your tunes aren't jazz tunes as we have come to think of them, so it makes sense that you grew up listening to singer songwriters as well. I can hear that influence, would you say that's accurate?

GK: Yeah, I would say that my biggest influence was Steely Dan and Donald Fagen musically, but lyrically my biggest influences were anything from Steely Dan to Neil Young to Bob Dylan. I really like jazz or fusion harmony as a backdrop for pop singers singing pretty abstract lyrics. There's something about that mixture that's always turned me on.

Steely Dan kind of wrote the book on that in many ways. I'm not saying we're like Steely Dan, although many have compared us to Steely Dan, obviously in the press, but for me Steely Dan was the compromise between jazz and rock and funk and folk and avant grade lyrics that allowed you to make of the lyrics what you wished without being heavily guided into thinking about anything in particular.

AAJ: On the topic of Steely Dan, I was looking at the personnel on the record, and you've got some really heavy players on there. You've got James Genus, Donny McCaslin and Kevin Hays among others. Is this kind of a Steely Dan situation where these guys are like hired guns and you brought them in to fill out your vision or is this your core band?

GK: Yeah, there's a twofold answer to that. From a studio setting, the new album has John Scofield on it, it has Marc Broussard on it, Donny Mccaslin, Seamus Blake, Kevin Hays, Bryan Reeder, Luques Curtis, Nathan Peck, Nate Smith, great drummer of course, and more.

There's something really wonderful in a studio setting about writing chord changes that pique the interest of musicians that are capable of improvising over almost any harmonic progression and bringing them into the studio and just kind of saying, "Play." When they ask "Well, what would you want me to play?" I say "Just play anything. We'll do 10 takes of you playing anything." Basically good things happen when you tell a great musician to do 10 takes of playing anything. We spent a lot of time culling through those different takes and editing. Usually something pretty cool happened in that process.

On the vocalist side, we have some amazing vocalists: Marc Broussard, Elliot Skinner, Conrad Sewell, Grace Weber, all with really good careers, Carol Leonhart, who is a member of Steely Dan, is also on our CD. She's another great singer. Lots of fun to bring all of these pros into the studio setting, let them do their thing and then reign it in through an editing process. Someone as great as Seamus Blake or James Genus, both guys on the new CD as well, in my opinion you don't tell them what to play, you just give them a sense for the vibe and choose amongst the various things that they do.

Now, in terms of a live act, because we've gone live for the first time, for pure logistical purposes you need to have a core band. We put together a core band with an amazing pianist named Bryan Reeder and 2 or 3 bass players that are amazing, Nathan Peck and Leon Boykins. We have 3 vocalists, Carolyn Leonheart, again from Steely Dan and also a really good jazz singing career in her own right, Mike Stephenson who's a phenomenal vocalist with a Stevie Wonder kind of vibe and then Liam Budge who has a really unique voice and a unique approach. Cory Cox is on drums, he's a great jazz drummer. We have a pretty robust, pretty incredible live band.

Some of these other people I mentioned may join us in that live band in due course, but we just started playing live in the last couple months which has been a lot of fun and it has obviously been a challenge to try and reproduce what you can create in a studio in a live setting.

AAJ: Speaking of a studio versus a live setting, the last record seemed to feature live instruments. It seemed like all the tracks were captured live, whereas it sounds like there's a lot more production on this second record. Is that you doing the production, and was it a deliberate stylistic choice that is meant to reflect the concept of the album?

GK: We live in an age where imperfection is not accepted, and it's no longer lovable. If imperfection is no longer lovable, then you don't want to be unlovable in the music that you produce. In this album, we've made a concerted effort to dial up the sonic clarity and the use of modern musical techniques. There is some drum programming. I experimented a lot with a mixture of different digital and analog pedals to come up with some whacked-out sounds.

One of the advantages of this album is that we produced it all in one studio as opposed to cobbling together the competing technological attributes off different studios, which was difficult. This time it was a more cohesive process. I think we used better vocal mics this time. I do oversee all of the production along with my engineer, who's very talented, Matt Powell. We sat there slaving over the computer for a number of hours that's almost embarrassing or neurotic. Hopefully the neurosis translates into a little more sonic clarity, and translates into a more interesting soundscape, if you will.

We don't want to get away from the concept of real instruments playing real music, and I don't think that we did, but you can't be left behind by technology or else you'll just be an old man grumpy, sitting in a room saying "Back in the day, we used to do it the real way!" There's no room for that, so you have to progress. You have to learn drum programming, you have to experiment with different sonic ideas. That's a big part of what happened on this cd. Yet, it still retains a lot of the more basic fusion elements. Like the live sound that you'd expect from a fusion album. I'm not saying it is a fusion album. I'm not sure what it is. I guess I'd call it street jazz or maybe fusion pop, or something like that.

AAJ: You said something just now, something along the lines of "imperfection is no longer lovable." Does that play into the concept of the new record?

GK: It's all like a stew of ideas, lyrically and musically. I guess what I was saying was people smell imperfection in the recording process now, and there's very little forgiveness for that. Imperfection is no longer lovable. It makes you a bit of a sonic outcast, and you don't want to be a sonic outcast when you're making music. You've got to make sure that you're really availing yourself of all the tools that exist to make modern music.

In terms of the album thematically, which you sort of alluded to, I'm still having some fun with all the New York City stories to which I'm exposed or about which I hear and occasionally in which I'm ensnared. I guess I'm endlessly fascinated by the madness of New York City. The earnestness of the place, how full of shit it is, its energy and all the insane contrasts that make it a really funny place. I find it really funny how serious everyone takes themselves, and it's fun to just write about that and create stories around that.

I'm not trying to write deep social commentary, and I'm not really trying to change anybody's mind about anything. I leave that to all the brilliant, deep-thinking artists out there. I'm just trying to hang together abstractions and fun ideas to paint pictures that make people think and make people relate the lyrics in some weird way to their own life predicament.

AAJ: So you'd say these lyrics are more observational that autobiographical? GK: They're certainly unintentionally autobiographical sometimes, upon reflection, but often they're just painting pictures of things that struck me as funny or sad or angry or abusive or ironic or supercilious in New York society. New Yorkers are very confident but they're also very desperate, and I'm not sure why. Some of the most successful people in New York are some of the most desperate. The lyrics are set against the backdrop of New York stories, just trying to paint pictures of different human predicaments and so on.

AAJ: How would you describe this music genre-wise?

GK: Other people have made comparisons to stuff like Steely Dan or Earth, Wind & Fire or Michael Franks or Snarky Puppy. I'd classify it as pop fusion, or street jazz.

AAJ: What is street jazz?

GK: I don't know, but it just feels right. I would describe it as just ironic in the sense that sometimes I'll set really sharp edged lyrics against the backdrop of things that are really smooth, almost quasi-easy listening at times. I guess I would just call it sort of pop fusion with a lot of different inputs from folk and rock and funk and jazz and so on.

AAJ: It is definitely very unique. There isn't very much music coming out that sounds like this, which is cool.