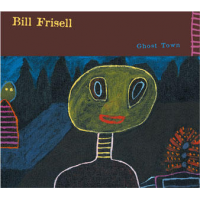 Bill Frisell has settled into a sound he is comfortable with. The guitarist was known in the eighties for an eclectic mix of sounds. He thrashed with John Zorn's Naked City and Powertools, played bebop with Joe Lovano and Paul Motian, and generally mixed it up with New York's Downtown crowd. Since relocating to Seattle in 1989, the Denver-raised, Berklee schooled guitarist has concentrated on an Americana sound, composing tunes with Aaron Copeland and Woody Guthrie in mind. This trend, began on This Land (1992) was carried through his Buster Keaton Soundtracks (1995), the Nashville album (1996) to last years Good Dog, Happy Man. The closest rock comparison to this evolution is Bruce Springsteen, whose Jersey past has morphed into a Steinbeck present with The Ghost Of Tom Joad. Frisell is Folky without a hint of hokieness. Ghost Town is his first solo record. But he really doesn't go it alone, mixing guitar loops and overdubs with his patented guitar effects. He covers Hank Williams, "I'm So Lonesome I Could Cry," and the Carter family, "Wildwood Flower." But is it jazz, you ask. Was Sonny Rollins' playing jazz when he covered "I'm An Old Cowhand?" If it's based in the blues, and it swings, it's jazz. Frisell is being Frisell, whether the songbook is Appalachian, George and Ira Gershwin, or John McLaughlin. In a marketplace packed full of Charlie Parker, Miles Davis, and Bill Evans imitators, it is refreshing to find an artist realizing his own voice.