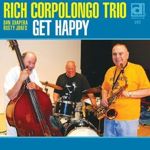 Tenor saxophonist Rich Corpolongo is a well-known figure on the Chicago jazz scene, having performed for decades with the likes of Frank Sinatra, Mel Torme and drummer Barrett Deems' big band. An author of four books on improvisation, Corpolongo is known for exploring a variety of jazz styles, from standard swing to avant-garde. For Get Happy, his third release on Delmark Records, the veteran reed man recalls the piano-less trio sound of tenor giant Sonny Rollins, with a straight-ahead live recording from Chicago's Columbia College.

Throughout this toe-tapping disc, Corpolongo's musings rise from the bebop well with the indelible markings of saxophonist Charlie Parker. Indeed, the disc is book-ended with two medium-tempo Parker classics, "Chi Chi" and "Dewey Square." With the support of only bass (Dan Shapera) and drums (Rusty Jones), Corpolongo is allowed the freedom to straddle the ins and outs of a tune's harmonic structure. Standard gems such as "Without a Song" and "The Boy Next Door" and the title track, find the leader in a playful state, twisting his lines into contorted shapes while maintaining a cool soulfulness.

The influence of Rollins is evident, not only in Corpolongo's improvisations, but in the way he manages a melody. His sly reading of "Wrap Your Troubles in Dreams" and "Lullaby of the Leaves," for example, contain out-of-left-field octave jumps and ornamental flourishes, bringing a delightful sense of unpredictability to the familiar.

All in all, Get Happy is an attention-grabbing listen from a seasoned improviser with a remarkable story-telling ability.

Chi Chi; Mangoes; Body and Soul; Without a Song; The Boy Next Door; Get Happy; Wrap Your Troubles in Dreams; Lullaby of the Leaves; Dewey Square.