By Doug Collette
October 17, 2020
Sign in to view read count 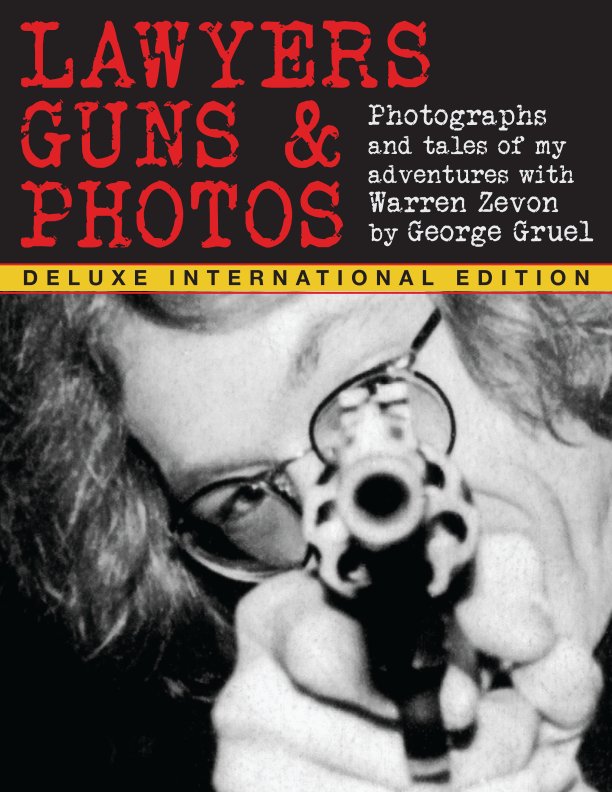 George Gruel may not have been Warren Zevon's only jack-of-all-trades, road manager and aide-de-camp (for six years), but having been called out to the stage, in no uncertain terms, during the frenetic finish to songwriter/musician's live album Stand In The Fire (Asylum, 1980), he's certainly the most famous. Gruel originally began his career as an artist, illustrator, and photographer before working on behalf of such disparate artists as Bob Dylan and the The New Riders of The Purple Sage prior to his tenure with Zevon and in 2012, he released the original version of Lawyers, Guns & Photos where he documented his years with the author of "Excitable Boy" and "Werewolves of London" from a perspective only a true insider could capture.

Now, almost exactly 20 years to the day since Zevon's passing, Gruel has re-released an updated version of Photographs and Tales of My Adventures with... containing additional material in print format, as well as a new e-pub version containing over a hundred audio clips including live music and conversations. The kinetic nature of the layouts is self-evident in each configuration, perhaps surprisingly so on paper: although it is not literally interactive, it nevertheless elicits rapid fire responses, not to mention an engrossing sense of suspense with successive turns of the pages. It is indeed akin to following its subject over the course of his career.

Notwithstanding the other superb books devoted to this mercurial artist—from wife Crystal's memoirs I'll Sleep When I'm Dead: The Dirty Life & Times of... (Ecco, 2008), to the laser-focused analyticals within Accidentally Like a Martyr: The Tortured Art of Warren Zevon by James Campion (Backbeat, 2018) then onward and upward to supremely-detailed Nothing's Bad Luck: The Lives of Warren Zevon (Da Capo Press, 2019) by C.M. Kushins, this may be the only one that brings a reader inside Zevon's personal and highly idiosyncratic world. George Gruel not only shared that territory, but was a kindred spirit of his fellow traveler/explorer, a companion who's only the most obvious instance of Warren Zevon as one of those rare individuals with charisma to spare, able to draw like-minded souls into his orbit and/or elicit from them (some if not all) his most infectious character traits.

Because the relationship between the two men revolved around music on stage, in the recording studio and on tour (plus various and sundry activities related to such endeavors, like press interviews) so does this book. As the design of the pages can display anything from prose to photos to memorabilia—from the reproduction of a guitar pick to original artwork drawn by Toto drummer Jeff Porcaro—Lawyers Guns and Photos might threaten to overwhelm with a whirlwind of sensory stimulation; the advantage of the paper medium over the digital (if in fact there is one) may be that any reader can more readily opt to absorb the content at a leisurely pace or simply pick and choose a particular focus, say the text or the photos of a particular individual for instance, as the fodder for dedicated perusal.

As such a veritable torrent of content at times, the 8.5" x 11" softcover certainly appears to accurately represent the life George Gruel lived with Warren Zevon. And if the photographs of the latter that rightfully dominate the book suggest anything, it is that this songwriter/music was more than merely a chameleonic character, he may well have been the epitome of multiple personalities (more or less in order at any given time. Images reveal the erudite scholar, the gonzo anarchist, the disciplined composer and the wildly abandoned performer with the link of continuity between those varied personae that very eccentric sense of humor he shared with the author. Together and apart, these two men lived life to the fullest.

And what is so enthralling to discern from these one-hundred twelve pages of the Deluxe International Edition is that the pair, along with (the overlapping categories of ) those musicians, vocalists, technicians, road crew and devoted friends who aided and abetted their adventures, did so to greatest extent their various roles and responsibilities would allow. So, we get to see the fitful assembly of a swing set for Zevon's daughter Crystal as a child as well as her father and James Gang / Eagles guitarist/songwriter/singer Joe Walsh wielding their electric instruments with a mix of love, hate and reverence for the sounds that arise therefrom. Accordingly, there's a joyful sense of a life well-lived that may seem to belie the darker side of Warren Zevon's time on this earth.

As George Gruel tells it though, the brighter side can and should stand distinct and apart from its opposite. And it is, in fact, fully and completely valid on its own terms. Accordingly, even as Photographs and tales of my adventures with Warren Zevon accommodates all manner of ways to 'read' it, the lasting overall impression reflects the joie de vivre these two men shared, not just with each other, but with simpatico souls such as singer/songwriter Jackson Browne and author Tom McGuane.

As such, the optimum representation of that stratified concept is Zevon's music, so it's no surprise there's hardly a better soundtrack to function as background for processing all this varied content. Any given page or, as often as not, any select portion of a page, from top to bottom and corner to corner, can call to mind in turn (and often in very quick succession) the titanic riffing of "Bad Luck Streak in Dancing School," the jaunty pop of "Looking For The Next Best Thing" and/or the poignant tenderness of "Accidentally Like A Martyr." Needless to say, "Genius" comes to mind more than once in as varied a context as its lyrics invite interpretation.

A fan of books, music and Zevon (or all those subjects) would be hard pressed to find a more multi-faceted publication than Lawyers Guns & Photos. Given that versatility, the publication (in either configuration) should lend itself to a durability that will come close to, if not exactly equal that of the best Warren Zevon recordings, if only because George Gruel has so unabashedly (and deservedly) preserved his memories for posterity, not only with due affection and admiration, but also with an idiosyncrasy that uncannily reflects his subject.