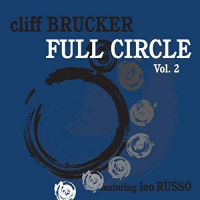 On Full Circle Vol 2, Albany, New York-based drummer Cliff Brucker and friends reach back to the swing and bop jazz periods to showcase their talents on a set of first-rate standards. These musicians clearly understand the bop trade and what emerges from their collective knowledge is solid and assured music. The entire affair is like a stroll around a familiar block. The arrangements have an early-60s feel. Think of a party with the Rat Pack.

Strong playing from Russo and Canterbury buoy the tunes. Russo sounds like a cross between Ben Webster and Paul Desmond, and in the Bennie Harris tune "Crazeology," a bit of Charlie Parker shines through. Canterbury's trumpet combines elements of Louis Armstrong and Miles Davis.

Brucker receives fine contributions from the rest of his ensemble. Ham offers some bright and bluesy piano solos. Case in point—his work on the Sonny Rollins's tune "Airegin." Gardner plays a nice solo on Klenner"s "Just Friends." And don't miss Novakowski's gentle blues chords on Claire Fischer's "Pensativa" and the licks he adds on the Fats Navarro number "Nostalgia."

Even though Levin appears in only three numbers, he makes his time count. His work on the Bennie Golson tune "Step Lightly" consists of blues melodies and triplets that add excitement to the piece.

Levin also offers a dancing opening to Canterbury's "Full Circle," the highlight of the album. The happy tune features some tight playing between Russo's tenor and Canterbury's muted trumpet, and Russo offers a smooth and gliding solo. Gardner walks the bass while Brucker adds rhythmic flourishes underneath. The song suggests a boat ride across a lake, the scenery whistling by in a bright afternoon sun. As you dock and disembark for dinner, you may ask—where's Dino and a martini? Enjoy.