Selwyn Lissack: Friendship Next of Kin 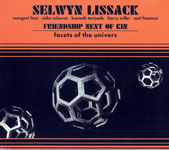 South African drummer Selwyn Lissack returned to the New York jazz scene for the first time in over thirty years this past December, playing a one-nighter at the Stone to celebrate the reissue of Friendship Next of Kin (1969), his only album as a leader—and an underground classic.

Friendship is an example of the evolving musical exploration of the era; each tune on the original album took up an entire side and defined a kind of free jazz symphony. The birds-in-a-pet-shop screeching of altoist Mike Osborne and tenorist Kenneth Terroade (whose "Love Rejoice was the influence for "Friendship ) give way to Mongezi Feza's pocket trumpet. Terroade returns for a solo shot and blows the hell out of his horn, while Earl Freeman sneaks in and out on the piano. Through it all Lissack lays down polyrhythmic underpinnings for the other players. (Two versions of the title cut were actually recorded, though the version with a drum solo did not originally make the cut. Both versions appear on this disc.)

"Facets of the Universe is a three-part epic that opens with a somewhat superfluous poem by Earl Freeman. When the words stop, the flood gates open. The fluidity of the music that follows results from musicians who play with passion but also know when to come in, how to give way, when to engage in dialogue or stay silent, and how collectively to navigate the shifting border that separates freedom from anarchy.

At the Stone gig, Lissack's bandmates were trumpeter Roy Campbell, tenorist Bryce Winston and bassist William Parker. Lissack's thunderous drum opening signaled the beginning of "Aphrodite, the first cut from The Sun is Coming Up (Fontana, 1970), a classic free jazz album by the Ric Colbeck Quartet—the only other recording that Lissack ever apeared on. Lissack thrashed, Parker pulsed, and Winston played wonderfully throughout the set, including a powerful a cappella solo mainly in the upper register. Parker's luminous pizzicato was so strong that it sounded like his notes could pierce Kevlar. Campbell's play on conventional and pocket trumpets was strong, although he was disarmingly off-key during one tune.

Decades after Friendship was released, Lissack played with the same fluidity and steadiness throughout the set, laying down rich yet uncomplicated lines to set up his bandmates. For the most part, there was no applause after the solos, a silence borne of respect, not dissatisfaction. The small gathering at the Stone understood the significance of the moment. For everyone that evening, it was all about the music.