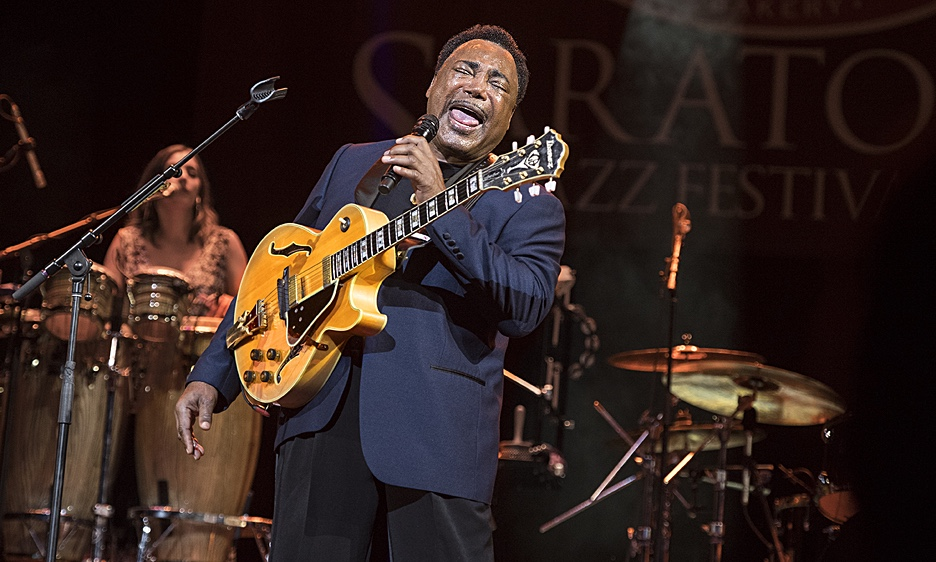 High-level musicianship came to the forefront at the 42nd edition of Freihofer's Saratoga Jazz Festival, and Mother Nature cooperated at the essentially outdoor event. Both of those factors resulted in one of the largest crowds in the past decade or so.

What those crowds saw were outstanding performances by vocalists, killer music from some of jazz music's standard bearers, and surprises from newer, unheralded groups. The festival at SPAC, produced by Danny Melnick of Absolutely Live is known for both, but he is particularly adept at shining a light on young talent.

One of those bright young talents was singer Veronica Swift with the Emmet Cohen Trio. She showed remarkable chops, in line with Anita O'Day and a splash of Sarah Vaughan... as well as, perhaps her mother, Stephanie Nakasian. Not only was her tone luscious, she moved in and out of the melody, toying with the phrasing, sometimes in hornlike serpentine lines; other times with emotion-filled theatrics. Song selection was out of the ordinary as well, including two clever Dave Frishberg songs, "I'm Hip" and "A Little Taste." A gorgeous ballad was "As Long As He Needs Me."

Kandace Springs, a Blue Note artist, came at her vocals through the prism of soul music. Her clear, rich voice adorned tunes like "The First Time Ever I Saw His Face" and created a sweet, comfortable carpet of sound. She accompanied herself on piano with just the right touch.

Norah Jones, of course, was not a new star but one of the festival draws. Her set included selections from Day Breaks, her new album, and well-known songs like "Come Away With Me" and "Don't Know Why." Overall, it was a mellow set with no distinction of moods. But her sultry vocals and breezy style carried the day well enough.

George Benson's set highlighted his singing, more than his strong jazz guitar chops, but that has been the case for many years. Still in good voice at age 76, he performed a number of his hits, including "Breezin'" from the huge hit album of the 1970s. The audience also got to hear a few numbers from Walkin' To New Orleans; Remembering Chuck Berry and Fats Domino, his new album. But he pleased the crowd by playing tunes from across his career.

For those who like their jazz straight and strong, the Joshua Redman quartet, the James Carter Organ Trio, Joe Locke's Subtle Disguise band, the Black Art Jazz Collective and Kansas Smitty's House Band filled the bill.

Joshua Redman is as strong as ever, in fact probably getting better with time. The group—Aaron Goldberg on piano, Gregory Hutchinson on drums and Reuben Rogers on bass—have a lot to draw from, as they have played on and off for two decades. All are stellar. His new album Come What May was featured. Redman's burnished tone and endless creativity is always on display when he takes the stage. A joy on a bright summer afternoon.

James Carter is a man with no inhibitions. His swagger is omnipresent, and he indeed likes to make a saxophone make noises one wouldn't expect it is capable of. Growling. Screeching. Soaring. But it fits and it doesn't hide the fact that this cat can flat out play. And his way with a ballad is sweet. Gerard Gibbs on the organ is soulful as anything, his chops part from gospel and from Richard "Groove" Holmes, but at this point in his career, what comes out at the end off the funnel is Gibbs.

Joe Locke is one of the great vibes players and his band, featuring the fine guitarist Jonathan Kreisberg cooked. Locke's rhythmic propulsion doesn't get in the way of his melodic ideas. Kreisberg has honed his chops with the likes of Dr. Lonnie Smith and knows how to burn and support with equal aplomb.

The Black Arts Collective was co-founded by saxophonist Wayne Escoffery, trumpeter Jeremy Pelt and drummer Johnathan Blake. It is a muscular, driving group that takes no prisoners. Pelt is one of the giants of his generation and is constantly pushing the music, not only with this band, but his own wonderful projects. Escoffery is, in a sense, an under-the-radar guy with the public, but he plays his ass off.

Kansas Smitty's House Band is a new find. The musicians—rhythm section and three horns—are all young. They locked into many a sweet, medium-tempo groove, laid down some old-time swing in certain moments and played hot solos. Original compositions were good and the band put in a solid afternoon's work.

The Cuban group Los Van Van is touring in celebration of their 50th year. Heavy percussion and exotic dance rhythms propelled the band and had people literally dancing in the aisles and on the SPAC lawn. That's their intent. And they do it as well as anybody.

Antonio Sanchez & Migration came at Latin-influenced music from a different angle. The drummer is a Mexican-American and his latest album, Lines in the Sand portrays the struggles of downtrodden people in Mexico trying to make the migration trip for a better life. The music isn't for dance. It's heavy. Singer Thana Alexa sings wordless vocals of great beauty, harmonizing with the melody at times, in synch with it at others. John Escreet wonderful, flexible, adventures keyboards help carry the day. Chase Baird on saxophone added organized chaos in sections, and backed Alexa's fine artistry at others. Sanchez is one of the finest drummers around, and his work held it all together.

On the mellower side was the Mercy Band, with Jon Cowherd on piano, Steve Cardenas on guitar, John Patitucci on bass and Brian Blade on drums, all fantastic musicians. Their collective sound was ethereal, not burning. It was pensive, but with an exploratory feel. It couldn't help but be thoughtful with those fine musicians listening, playing and meshing. A good set.

Donna Grantis, known as a guitar shredder who worked with Prince, meandered on the guitar, but played trite ideas that never caught fire, and music that wandered—to where? Unsure.

Trombone Shorty has always played for entertainment first, even thought the musicians are very good. He seems to have moved more into hip-hop and "look at me" material, with a lot of physical too-much-testosterone histrionics after his solos. High energy. Low creativity.