By Glenn Astarita
December 21, 2015
Sign in to view read count 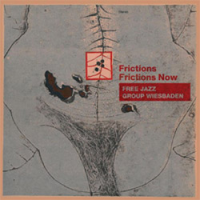 When an obscure buried treasure is reincarnated and unexpectedly arrives in your mailbox, it often looms as a source of interest. Case in point is this little known Wiesbaden, Germany-based experimental jazz group that formed in the late 1960s and recorded two limited edition LPs: Frictions (1969, Self-produced) and Frictions Now (1971, Self-produced). At the time, free jazz in West Germany was an embryonic idiom with the advent of saxophonist Peter Brotzmann, pianist, Alexander von Schlippenbach and other notables. But this quartet hustled and bustled in the regional Wiesbaden club circuit for a mere pittance and eventually disbanded in 1972 for various reasons, as the artists splintered into other persuasions and never flourished within nascent European avant-garde circles.

Now condensed on disc, the albums unveil a paragon of improvisational flows, commencing with the multipart 37-minute title track "Frictions," which is mesmeric journey, heightened by the musicians' multitasking modalities and thrill-seeking impetus. From the onset, you experience the musicians' dazzling interactions whether they role play as opposing forces or deep dive into a swirling eddy. With either Michael Sell or Gerhard Konig's searching flute lines, and Dieter Schiff's punctual block chords on piano, the band marches to a higher order via buzzing interludes and the hornists' melodic phrasings that detour into mind-bending semi-structured escapades. Their enthusiasm and nanosecond-speed inventions intimate a dizzying speedway, coupled with a few nods to Ornette Coleman's harmolodics and solemn digressions, engulfed in a myriad of disparate motifs seamlessly woven together.

The musicians multitask by using prepared guitar, Eastern flutes, prepared trumpet and other instruments that augment the shifting paradigms while broadcasting polytonal choruses and wraithlike overtones. Along with a few brisk and unanticipated unison riffs, the quartet will encounter a fork in the road or a dead-end while switching gears then soar into parts unknown. They underscore the preponderance of this impressive work with countless reengineering processes sans any filler material. It's an energized rush! But they temper the pulse and momentum on "Frictions Now Part II," where Konig and Schiff employ their arsenal of flutes, contrasted by trumpeter Michael Sell's bold phrasings amid some delightfully strange mini-motifs; cat and mouse romps, and asymmetrical beats. No doubt about it, this unit plotted intensely layered and shrewdly focused gambits with winding plots and joyful noise, encapsulated by the players' strategic goals and irrefutable camaraderie.