BY NENAD GEORGIEVSKI
December 21, 2015
Sign in to view read count 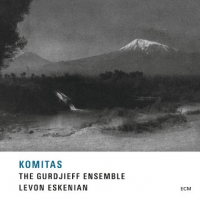 When Armenian arranger and composer Levon Eskenian took on to reimagine the music of Armenian mystic and philosopher Gurdjieff for the Gurdjieff Ensemble's debut record on ECM, he touched upon the wealth of melodies that Gurdjieff initially heard and was inspired by during the travels he undertook during his lifetime through the Caucasus, the Near East and Central Asia, and eventually were hummed to pianist Thomas de Hartmann. And it was Eskenian's fertile imagination, deep knowledge and understanding of both Gurdjieff's music and the music he was inspired by during his journeys that eventually led to him reshaping these melodies colorful arrangements for a full orchestra. His arrangements were sensitive and loyal to the original melodies but he took the overall music somewhere else, much closer to the original sounds. Basically he reversed the process from melodies on the piano to a full orchestral score.

With characteristic imagination Eskenian has taken the same approach of reversing the process of piano compositions by renowned Armenian composer, ethno-musicologist and priest Komitas Vardapet who lived at the turn of the 20th century into pieces arranged for the Gurdjieff Folk Instruments Ensemble. Komitas is considered to be a national saint in Armenia and father of Armenian music. Much like Hungarian composer Bela Bartok, he also took folk music from his country and incorporated its characteristics in order to develop a national musical style. As can be read from the liner notes, Eskenian has been navigating himself through Komitas' writings where he is mentioning the use of certain instruments. According to the album's very detailed and informative liner notes, Komitas was also taken as a reference point by de Hartman when he was arranging Gurdjieff's music for the piano. Since Komitas' writing had an influence over Eskenian's approach towards re-imagining Gurdjieff's music, it seems that in a way, the music on Komitas has come a full circle.

Yet, for all the apparent and obvious historical leanings, the music here is not a mere scholarly treatise. The arrangements are used as a signposts where improvisations also take part in order to elevate these 18 tracks to a different plateau. Eskenian and his Ensemble are taking a wondrous journey through the music and the world of another musical mastermind and again the breadth and depth of their artistry which is expressed throughout this magnificent collection is absolutely colorful, emotional and mesmerizing. The result to this is rich and deep musical story telling which finds this able ensemble journeying deep into the works by this renowned composer and through his works into their country's vast musical treasures.

The whole album feels like a complete whole and each track feels like series of movements. Along the way, this ensemble is running a fascinating gamut of moods and colors. Imbued with intimate arrangements, the moods shift from quiet introspections, as on the opening tracks such as "Zula" or "Tsaghik Asem, Mani Asem" to "Havun" is a poignant duet for two doudouk flutes, where the individual or paired instruments resonate deeply with their overwhelmingly heart-rending and mournful tone. This deep and meditative mood is disrupted with tracks such as "Msho Shoror" or "Mankakvan, Nvag XII" with the loud zurna coming to the fore. "Lorva Gutanreg" is a beautiful mediation on pough, a wooden flute which simple melodies produce feelings of yearning. "Yot Par" or "Seven Dances" is a seven part suite where each piece is tied to a city in Armenia where they originated from. The music unfolds slowly and dramatically, where the musicians achieve a deep and intimate communion as their instruments mesh together. "Hov Arek" (Dear Mountain Send me a Breeze) is a traditional song and the only one to feature a vocal. The whole set end with a very tender and emotional track "Akna Oror" where two duduks intertwine gently together and minimally supported by santur.

There are many transcendental moments on this recording. Drawing on Armenia's vast legacies of both religious and secular musics, these different strands both meet and mesh together on this record. As on most ECM releases this music also invites contemplation, and more than that, it provides a path into finding a deeper aspect of oneself. Komitas is an outstanding achievement both for its depth and the way musicians interconnect inside the music. These 18 songs are truly united in a tidal wave of sounds, history, emotions and mystery.

About The Gurdjieff Folk Instruments Ensemble