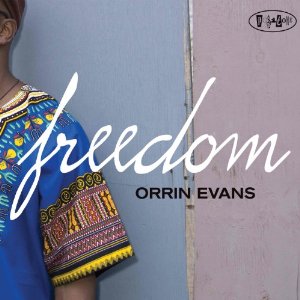 Philadelphia was a symbol of freedom long before Elton John ever penned his well-known tribute to tennis legend Billy Jean King. The city was a hotspot for American revolutionaries when the British were running the show, and Philadelphia played host to the First Continental Congress and the Second Continental Congress, which signed the Declaration of Independence. This city has come to represent the ideals of freedom within American society, and its rich jazz history is a reflection of the city's past, pointing to all that is right and good with the City of Brotherly Love.

Pianist Orrin Evans was a first-hand recipient of all that the city had to offer in the form of on-the-bandstand education and mentorship. Philly legends like organists Trudy Pitts and Trudy Pitts, drummer Mickey Roker and pianist Sid Simmons imparted their hard-earned wisdom into Evans' hands and head, and the pianist's formal studies with William Whitaker, Charles Pettaway and Jack Carr helped to round out his hometown musical upbringing. While subsequent studies at Rutgers University and the lure of New York in the '90s eventually drew Evans eastward, he never forgot where he came from.

With Freedom, Orrin Evans comes full circle, paying tribute to the mentors and friends that helped to set him on his path in jazz. While the music was recorded in New York, the roster of musicians on the date is all friends from Philadelphia. Bassist Dwayne Burno and drummer Byron Landham—with drummer Anwar Marshall replacing Landham on a few tracks—are on hand to provide crisp rhythm work, and the trio is expanded into a quartet on two numbers, allowing for the addition of tenor saxophonist Larry McKenna's full-bodied horn work.

The music itself, despite a title that might indicate otherwise, is actually Evans most conventional output in quite some time. The spiky intensity of Captain Black Big Band and the left-leaning, in-and-out esthetic of Tarbaby's work is nowhere to be found on this date. While Evans still injects his own personality into these pieces, his mission here is to honor others. Swing is a central element on a large number of the tracks, but it isn't all that Evans has to offer. Dewy balladry built with glacial grace (Evans' "Dita"), a rhythmically engaging workout on Shirley Scott's "Oasis," and an album-closing, solo piano take on Herbie Hancock's "Just Enough" all exhibit different sides of the indefatigable Orrin Evans.

One For Honor; Gray's Ferry; Shades Of Green; Dita; Time After Time; Hodge Podge; Oasis; As Is; Just Enough.