By Glenn Astarita
October 19, 2018
Sign in to view read count 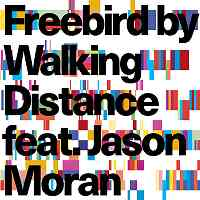 New York-based Walking Distance garners the benefits of upper echelon pianist Jason Moran appearing on select tracks. The ensemble sparks memories of older, Charlie Parker-inspired ensembles like Supersax, featuring saxophonists Warne Marsh, Med Flory and many others. But this young band doesn't mimic or perform hard bop with a strict allegiance to the infancy of this idiom, as they propel matters into a futuristic game plan on this rousing set.

Invigorating compositions and a few unorthodox methodologies coincide with the respective musicians' impressive chops. In a sense, think of a teenager's' fascination with a toy by stripping it down to mere parts, only to reassemble, and becoming intimately familiar with the nuts, bolts and overall design. As for the hard bop pieces, well, they're often framed on rapid-fire, complex themes, along with the hornists' razor-sharp unison choruses and precision-oriented time signatures, as Moran's articulate and speedy runs, alternating with polyrhythmic chord clusters, are augmented by brief sprees into the free zone and rearrangements of a given melody.

Indeed, the Parker influence surfaces on many tracks, complete with punctual accents and split-second diversions. Consequently, they switch gears during the loosely crafted spin on jazz fusion heroes Weather Report via "Feather Report," where drummer Shawn Baltazor renders a thrusting 4/4 pulse, intensified by saxophonists, Kenny Paxton and Caleb Curtis' rowdy passages. Yet, "Simple Ghilnooorty" is an off- centered, ethereal piece, spiced by the drummer's cyclical cymbal splashes. On a side note, most people wouldn't anticipate the use of a progressive rock instrument such as the mellotron on a Charlie Parker tribute. However, bassist Adam Coté and Ben Rubin occasionally incorporate this beloved, "haunting strings section"-like tool into various motifs.

"Lost and Found" is a sizzling bop burner, escalated by Mmooran's swirling, barrelhouse voicings and terse free-form statements, leading to an avenue for the saxophonists to bump it up even more. "Cheat Sheet" is a slippery jazz funk groove with interconnecting sax lines, segueing into a silky medium tempo vamp, treated with offbeat choruses. Nonetheless, the ensemble performs these works with a "full steam ahead" protocol that keeps the party intact from start to finish.

From a holistic observation, the band doesn't infuse a bop-by-the-numbers approach. Instead, they toss numerous curveballs into the mix, and deviate from the Parker roadmap on several occasions. Indeed, a standout effort, and hopefully not a one-off venture.