BY GLENN ASTARITA
February 3, 2006
Sign in to view read count 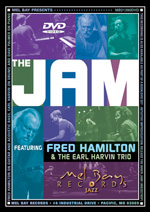 Prior to receiving the review copy of this DVD I had not been acquainted with drummer Earl Harvin's jazz-based trio. But as the documentation states, this band has become quite popular throughout the Texas music circuit. With electric guitarist Fred Hamilton and top-notch acoustic jazz pianist Dave Palmer, this footage captures the band's SRO performance at a Denton, Texas venue.

The concert, shot in black and white, runs for fifty-seven minutes and the disc also contains workshop improvisations and interviews. But the primary impetus of this outing resides within the art of (intuitive) improvisation and how a finely tuned unit can also dish out more than a few loose grooves. As an electric guitarist, Hamilton uses space as a vantage point, while generally picking motifs apart and executing brisk single note lines. With these four extended workouts the trio goes the bass-less route, sans one torrid piano trio piece where Hamilton mans the bass. Otherwise, Harvin is a rhythmic motivator as he engages African tom-tom rolls and polyrhythmic maneuvers.

The trio moves forward like a well-oiled machine, featuring an abundance of shrewdly enacted call and response exercises. On "Ancient of Days, Hamilton cranks his volume up a few notches atop his bandmates' propelling force and driving thematic choruses. Consequently, these folks would probably win over audiences on a global basis, especially if they chose to expand their demographic concerns and marketing initiatives. (Recommended...)

Track Listing: The Gig: The Earl Harvin Trio at Hailey's in Denton, Texas; Blues Dues; Ancient of Days; A Face in the Mist; I Knew You Before. Workshops and Interview.