BY EYAL HAREUVENI
February 3, 2006
Sign in to view read count 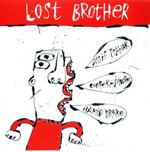 As its name implies, Lost Brother is about familiarity and musical intimacy. The first collaboration between Israeli reed man Assif Tsahar and Chicago drummer Hamid Drake was named Soul Bodies (Vol. 1, Ayler, 2001), and the musical bond between Tsahar and Cooper-Moore began when Tsahar guested in William Parker's In Order to Survive, where Cooper-Moore played the piano. The relationship continued when Tsahar released several of Cooper-Moore's recordings on his Hopscotch label, culminating with two enchanting duets (America, 2003; Tells Untold, 2005).

Cooper-Moore only plays his invented instruments, which spice the nine compositions with exotic colors. On the opening track, "Breaking the Water," and the subsequent "Departure," he uses his twanger and didley-bow to spread heavy, funky fretless bass-like vamps, much to delight of Drake, who enjoys dancing around these lines. On "A Falling Leaf," the magnificent "Dugong the Sea Cow," "Confessions" and "The Shepherd," his ashimba adds a West African groove to Drake's relaxed Middle-Eastern and Indian-tinged frame drum or tabla playing. Meanwhile Tsahar gently binds the two complementing rhythms with restrained and meditative bass clarinet playing, quite often quoting one of the rhythms. Tsahar's efforts on these tracks reflects the distant scenery that Cooper-Moore and Drake sketch.

The kinship between Tsahar, Cooper-Morre and Drake turns even free-blowing tracks such as "Seeking the Punto Fijo," "The Coming of the Ship" and the closing track, "Goin' Home," into a very tight excursions based on forceful funky grooves. Cooper-Moore and Drake instantly lock into a groove that provides solid ground for Tsahar's assured flights. With such musical kinship and joyful playing, they cannot miss.

The funny artwork by Lebanese trumpet player and comic artist Mazen Kerbaj, hopefully a sign of a much-desired Middle Eastern artistic collaboration, adds to the enjoyment of this beautiful gem. Warmly recommended.

Breaking the Water; A Falling Leaf; Departure; Dugong the Sea Cow; Seeking the Punto Fijo; Confessions; The Coming of the Ship; The Shepherd; Goin' Home.