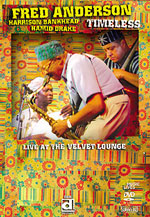 Shot during the final days of the original Velvet Lounge, Timeless presents tenor saxophonist Fred Anderson's trio playing one of his last shows at the Southside Chicago bar he has run since the early 1980s. A victim of poor urban planning, the bar was located in a block recently demolished by the city, but Anderson has persevered, relocating the club to a new space nearby. This concert DVD captures the members of Anderson's trio at the top of their game in the setting that they helped make famous.

Anderson was initially involved in helping establish the concept and inception of the AACM. He played their first organized gig, but was only documented on Joseph Jarman's Song For (Delmark, 1966). He remained in Chicago to raise a family and run the bar that would eventually become the Velvet Lounge while his peers made their way around the globe, expanding the possibilities of free jazz worldwide. Having stayed the course, Anderson has become known equally well for his phenomenal club and his own distinct artistry. Anderson's dedication to the music has made the Velvet Lounge a training ground for numerous Chicago improvisers over the years. Just ask Ken Vandermark.

As for the music itself, the trio is a classic tenor sax, bass and drums lineup that embodies all the best qualities of its ancestry. Anderson is a focused, linear player, more interested in inventive melodic development and circuitous contours than hoarse emotive embellishments. Harrison Bankhead is a monster bassist, and seeing his hands pluck, bow and slap his contrabass belies the sort of skill it takes to tame such an instrument. Hamid Drake is one of the finest drummers alive today, and watching him careen effortlessly over his kit, dabbling in multi-ethnic polyrhythms, free bop ride accents and urban funk is amazing, especially on the title track. Visually, Anderson is a stoic and rigid presence, hunched over while delivering flurries of notes, leaning against the sonic hurricane his peers force him to navigate.

The trio's interaction is never less than superlative. Seeing music like this live is always preferable to hearing it on record; the eye contact, the knowing smiles and slight nods all provide cues for the viewer to a witty phrase or tricky passage which they might have missed without the visuals. The video is shot with a "you are there" perspective, with multiple cameras expertly avoiding one another, giving the impression of front row seating. Brilliantly edited using multiple angles and seamless sound splicing, the technology never intrudes on the performance.

While the décor of the old Velvet Lounge may leave one desiring something a bit more (or perhaps less), its funky yellow floral patterned tackiness adds to the casual, almost loft-era/basement vibe. Far from a typical concert film, the laid-back attitude on this DVD is expanded in a revealing interview with Anderson about his life and the history of the Velvet Lounge and where it's headed.

As a document of Chicago's finest delivering the goods in their hometown, Timeless is required viewing for all fans of creative music.


Tracks: Flashback; Ode To Tip; By Many Names; Timeless.