BY DAN BILAWSKY
February 24, 2013
Sign in to view read count 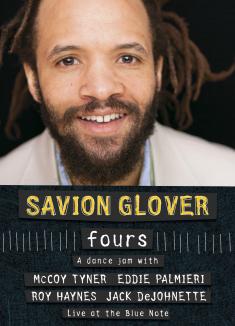 Tap titan Savion Glover has been known to bring in the noise and the funk, but this DVD is about bringing out the jazz. Glover, the dancer/actor/choreographer who sits at the top of the tap pyramid, has long been inspired by this music and the figures that make it. He's tipped his toes into jazz waters on various occasions over the years and this document makes it clear, to those that weren't already aware, that jazz is a feet-friendly art form.

Four different performances that were captured during a late 2009 residency at New York's Blue Note are presented on this DVD. Each of Glover's four high profile sparring partners, in addition to holding the distinction of being NEA Jazz Masters, are known as individualists; the common thread that connects them all is a belief in the power of the percussive. Pianist McCoy Tyner brought brilliant weight to the work of saxophonist John Coltrane and his own music, pianist Eddie Palmieri redefined Latin sounds through his own body of work, drummer Roy Haynes has been living up to the "snap crackle" nickname throughout his illustrious, all-encompassing career, and Jack DeJohnette has been at the forefront of jazz drumming for decades; Glover couldn't ask for a better list of potential collaborators.

"Jam #1" brings Glover into contact with Tyner and, unfortunately, proves to be the least successful encounter. At first, Glover seems like a superfluous figure in the mix. Tyner and the band press onward and Glover does his thing, but he doesn't necessarily connect with the pianist. When Tyner eventually works his way out of the mix, it becomes apparent that the connective issues aren't on Glover's end; he mixes it up in stellar fashion with bassist Andy McCloud and drummer Brian Grice, so he can't really be faulted for the failed marriage with Tyner.

The other three jams are completely different stories that paint a positive collaborative picture. "Jam #2" brings in Palmieri, and the pianist proceeds to blend ragtime, blues and vamping Latin ideals. He recognizes the give-and-take needed to make the marriage work and the rest of the band falls in line. "Jam #3" is an encounter between Haynes and Glover, with saxophonist Marcus Strickland providing a melodic dusting on top. The octogenarian drumming legend's playing is as eye opening as his silky gold shirt and Glover is inspired to great heights during their rhythmic confab. "Jam #4" gives DeJohnette and Glover a chance to go at it. At times, one can almost sense Indian-influenced undercurrents moving through their work, but they also speak other languages during their rhythmic discussion(s).

Glover appears on screen to share his thoughts in between each performance, but he often seems to be at a loss for words; his feet tend to do his talking and they're never without something to say during Fours.