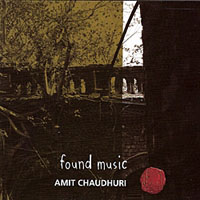 Calcutta-born singer Amit Chaudhuri's follow-up to This Is Not Fusion (Babel, 2010) is another captivating and deeply idiosyncratic fusion/not fusion of Hindustani classical music, jazz, rock and blues. It's a style Chaudhuri, with several albums of "pure" Hindustani music already behind him, began developing in 2004 with the Amit Chaudhuri Band, which features his singing alongside electric guitars and keyboards, acoustic trumpet and tabla. If you haven't heard the band before, you're in for a treat—dreamy raga-based discursions which incorporate the acid rock songbook, trumpeter Miles Davis' modal legacy, Delta blues and retro Tin Pan Alley.

The music, to its advantage, sounds like it was created by a simple combination of osmosis and memory. But Chaudhuri, who is also a novelist, poet and academic, and a Fellow of Britain's Royal Society of Literature, can set out an intellectually rigorous rationale. To paraphrase him approximately, the band explores a syncretic collage of diverse cultural traditions, weaving snatches of British and American tunes ("found music") onto a codified Hindustani musical tapestry, and creating, not fusion, but a unique space in which each element takes on a new life. You don't need to know any of this to connect with the music, however; all you need is a nodding acquaintance with Hindustani music and a reasonably broad knowledge of post-1950s British and American jazz and rock.

On This Is Not Fusion, Chaudhuri recontextualized George Gershwin's "Summertime" and Eric Clapton's "Layla" within Hindustani raga. Found Music does the same with Jerry Leiber & Mike Stoller's "On Broadway," the Byrds' "So You Want To Be A Rock And Roll Star," Joaquin Rodrigo's "Concierto De Aranjuez," Doors Wide Open' "Break On Through," The Beatles' "Norwegian Wood," The Beach Boys' "Good Vibrations" and Leonard Cohen's "Blue Raincoat." Sometimes these tunes introduce a track, sometimes they only reveal themselves further in; briefly and infrequently they're sung and played straight; mostly they're reclothed (as distinct from recalibrated) and then riffed on within Hindustani harmonic and rhythmic structures.

On the band's second album, the production is better and the sound richer than before, and this time out Chaudhuri puts aside the guitar to concentrate on his singing. His caressing, perfectly pitched tenor voice is delightful. The lineup is the same as on This Is Not Fusion, save for the inclusion of a new bassist, Sanket Bhattacharya, on nine of the ten tracks. Jonathan Impett's lovely trumpet glows again, and Prasenjit Ghosal's guitar and Indrajit Dey's keyboards move elegantly between Haight-Ashbury and an area akin to Miles Davis' In A Silent Way (Columbia, 1969) or early Weather Report.

On Broadway (Postcolonial Version); Saraswati; One Fine Day; Country Hustle; Rain; Messages From The Underground (Break On Through); So You Want To Be A Rock And Roll Star; Good Vibrations; Norwegian Wood; Famous Blue Raincoat Suite.