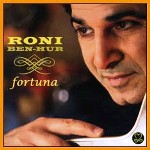 This is a worthy follow-up to Roni Ben-Hur's Smile (Motema, 2009), on which he was memorably paired with fellow guitarist Gene Bertoncini. The Israeli-born composer and arranger is teamed here with three stalwarts, the late pianist Ronnie Mathews, percussionist Steve Kroon and drummer Lewis Nash. This is the same rhythm section Ben-Hur used for the album that preceded Smile, 2005's Keepin' It Open (Motema Music). They're joined by bassist Rufus Reid, with whom Ben-Hur worked on the guitarist's fourth release Signature (Reservoir), whose presence is always a guarantee of quality. Sadly this was one of Mathews' last recordings before dying in the summer of 2008, though his piano is as ever in top form.

Beginning with the romantic title tune, the in-the-groove chemistry of the group is as evident as it is irresistible. Mathews' authoritative timing and masterful harmonies provide perfectly complementary anchoring to Ben-Hur's guitar. The guys are cooking throughout. "The Intimacy of the Blues," a lesser-known Billy Strayhorn gem, opens with a mini-crescendo from drums followed by a lengthy and close interplay between Mathews and Ben-Hur that sweeps up the listener. Mathews solos with just the tastiest bit of Reid's bass dropping in after a dash of Nash's brushes. Never too much or too little, it all sounds as if it couldn't possibly be played any other way or any better.

Another Ben-Hur tune, the bebop-ish "Guess Who?," is one of several tunes on the set that have more than a little Latin flavoring. He and Mathews again pair up for a lengthy, infectious duet. On Jobim's "So Tinha de ser Com Voce," there's more swaying rhythm, but with a striking difference that transforms the bossa into something closer to chamber music.

Amidst all of these splendors the group does Harold Arlen's "A Sleepin' Bee" with a multi-flavored opening passage by Ben-Hur. Before long the ensemble has joined in for some deeply swinging, straight-ahead jazz. Here and throughout the set the playing is as effortless sounding as it is joyful.

Fortuna; I Get Lost in His Arms; Guess Who; Modinha; The Intimacy of The Blues; Were Thine that Special Face; A Sleepin' Bee; Granada; You Are There; So Tinha de Ser Com Voce.