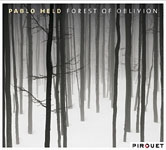 Pianist Pablo Held showed early promise by winning three Young Jazz Musician competitions in Germany, the first when he was just 13. He then went into august company playing with the WDR Big Band and trumpeter Manfred Schoof.

On Forest of Oblivion, his first as a leader, Held shows just why he has been such a strong presence. He plays with a subtle urge for nuance, letting his music glow. Just as certainly, he can turn up the beat and turn in a satisfying performance.

Held's compositions mark the influence of the romantic European tradition, but he also turns his ear and mind to Ravel, Joe Zawinul, Herbie Hancock and Bill Evans. All mark their presence in his tonality and harmonic conception.

Held enunciates his music with flair, aided by empathic bassist Robert Landfermann and drummer Jonas Burgwinkel . The trio works with a consonance that adds to the dynamic, both in the subtle and energetic essays of the compositions. The interaction is seen to advantage on the improvised "Interlude," where the trio constructs a glacial edifice before it gets a more pronounced dimension. Held resolves the initial spaced-out motifs with a shower of crystalline notes that blend in with the rhythm that Burgwinkel stirs with the brushes. As for Landfermann, he lays back and bows his bass, an anchor for the other two.

The delicate title track finds Held in a reflective mood, playing with spatial deliberation. He does stop to inject repeated notes, and for a brief but welcome prance that lights up the path. His take on Wayne Shorter's "Ana Maria" is tantalizing; a point of view that pays homage to the melody, and keeps the emotion tugging even as he reinvents the progression. In doing so, Held stamps his credentials as a thinker and improviser.

"Phasen" throws in a pleasant surprise, evolving into charged bop after a sedate opening. The atmosphere is electric, with crisp drumming, a roiling bass line and a jubilant cascade from the piano, before it all comes back to the quiet.

Held prefers delicate climes but his ability to move away convincingly make him a talent to watch.