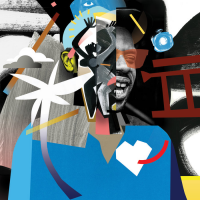 The Los Angeles jazz scene clustered around the community of session musicians known as the West Coast Get Down (WCGD), and its most prominent member (and now ex-session musician), Kamasi Washington, is a US equivalent of London's underground jazz scene. Both exist in parallel universes to the jazz establishment, both are culturally inclusive though peopled mainly by musicians of African heritage, both are informed by and sometimes explicitly address social issues, and both are extending jazz's reach by incorporating other musical styles—among much else, Afrobeat and reggae in London, funk and hip hop in Los Angeles.

What's not to like? Hardly anything, as it happens, though some of Washington's admirers wish he would learn that less can be more when it comes to both orchestration and album formatting. There are no such concerns, however, with WCGD trombonist Ryan Porter's third album, which follows 2017's Spangle-Lang Lane and 2018's The Optimist (both on World Galaxy). It is an 84-minute affair, but the 11 tracks fit on one CD.

Porter took the album title from a mid-1960s interview in which John Coltrane said he wanted his music be a "force for good" in a troubled and divided world. Recorded between sessioning and touring commitments from 2014 to 2018, Force For Good's core personnel includes WCGD luminaries Washington, keyboardists Brandon Coleman and Cameron Graves, electric bassist Thundercat, acoustic bassist Miles Mosley and drummer Tony Austin, all of whom get space to stretch out. Opener "Madiba," dedicated to Nelson Mandela, establishes the album's aesthetic, spanning jazz and soul and built around vamps and style transitions. The other ten tracks follows suit, with some leaning closer to straight-ahead jazz and others to soul, though most morph between one and the other.

Porter's ability to inhabit balladic moments as convincingly as he does more muscular ones is heard to advantage on covers of Stevie Wonder's "Blame It On The Sun," from Talking Book (Tamla, 1972), and Rotary Connection's "Memory Band," from Rotary Connection (Cadet Concept, 1967).

A multi-faceted and satisfying album. The core lineup brings a degree of cohesion to the four-year recording timeline, but not quite enough for the album to merit a four-star rating.