Home » Jazz Articles » Rotem Sivan: For Emotional Use Only 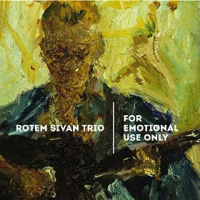 A large number of younger jazz guitarists tend to turn their albums into shock and awe campaigns, with aggression, overwhelming force, cutting tones, and electronic gadgets galore firing down on listeners. The work of guitarist Rotem Silvan is a refreshing alternative to that heavy artillery school of guitar.

On his debut—Enchanted Sun (Steeplechase Lookout, 2013)—Sivan established himself as a thoughtful improviser, composer, and collaborator, drifting along and letting his guitar tones waft out into the atmosphere as bassist Sam Anning and drummer Rajiv Jayaweera assisted him in casting his spells. With this follow-up, Sivan continues his trio-based journey, this time with bassist Haggai Cohen Milo and drummer Mark McLean.

These three men manage to bring low-flame beauty back to modern jazz. Sure, they can swing and burn with the best of 'em, as demonstrated during "Sefi's Blues and "Pass It On," but the way each man coaxes out a reaction or a simple melodic suggestion from the others is just as impactful. Note the way that tenderness serves as a home base and launching pad during "Spirals," a song that builds to great heights several times before returning to the roost. And observe the way that this trio dissects Antonio Carlos Jobim's "Useless Landscape," delivering one of the least derivative takes on Jobim's work in some time. These three men talk to each other, as opposed to the scores of musicians who talk at each other.

The honesty and beauty of Rotem Sivan's upper register notes glinting in the light of the ear, Haggai Cohen Milo's melodic-based dialogue, Mark McLean's freedom within time, and a general appreciation for the respiratory needs of the music are all important aspects of this work; nobody has to come up for air because nobody needlessly busies themselves. The instruments may not be set to stun here, but the music still manages to astonish.