Second Sight: Flying With The Comet 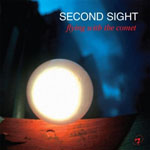 Some jazz fans have come to look down on the '80s as a lost decade. A band like Second Sight shows just how wrong they can be, with the reissued Flying with the Comet (1986) thrumming with intensity.

The brainchild of pianist and composer John Esposito, the band refuses to choose between tradition and innovation. All the traces of the past greats who inspired this music show up clear and sharp as ever in the sound and spirit; that said, these guys let nothing hold them back.

Esposito shows warmth and personality, throwing odd notes into familiar mixes with the cool confidence of a well-dressed mad scientist. There's joy in what he plays, tinged as it is with gospel and hard bop; but it's tailored for a man who wants his own sound heard. Dave Douglas, 23 years-old here, brings high heat with a master's control. Jeff Marx's sax sounds close to blasting at the seams, adding hints of Michael Brecker, Sam Rivers, and Joe Henderson to a breathless, high flying intensity. Drummer Jeff Siegel and bassist Allen Murphy keep it all together with an inspired flexibility and sensitive response.

The opening title track rides a launching blast of free horns into a head that's recalls the great explorers of '60s Blue Note—Wayne Shorter, Herbie Hancock and Andrew Hill. It's appropriately intense, with Douglas spitting fire, cooling himself down, then working himself up again, while Esposito's piano matches streaks of beauty in the right hand with subtle dissonance from the left. And the music only gets tighter from there.

"Barbara" is a pretty, atmospheric ballad—the horns playing around with its melody, though the really interesting stuff comes out of the piano keys. But "Birthright" may be the highlight, a 14 minute-plus jam simmered in Afro-Latin percussion and groove. Marx reaches down for a little extra with a honking, out there solo, before passing the baton. Douglas in turn channels the energy into brilliantly lyrical work that gets Esposito and percussionist Berryhill echoing him. The pianist then sets up a conversation of his own, passing different lines back and forth between his hands.

The previously unreleased material is just as good. "We Got Rhythm" displays a take-no-prisoners intensity at high speed, setting squeals and squawks against lyrical post bop. "Jump at the Sun" is the same deal, but draws out to a fever pitch with Marx's most ecstatic statement of the album. "Two" also pushes the pace up, with great vocal exchanges from the two horns.

"Don't Look Back"—so chill, bluesy, and swinging—is the perfect way to close things out. Marx shows his wide range of skills, Douglas spins a quote of "Desafinado" into an awesome statement, and Esposito bobs easily along with just a few carefully dropped hints of darkness amidst the dancing of his keys. It's jazz that pushes off the timeline, sounding as fresh as ever.

Flying With The Comet; Barbara; Song For A New Life; Discoverers; Birthright; We Got Rhythm; Jump At The Sun; Two; Don't Look Back.