Geri Allen: Flying Toward The Sound 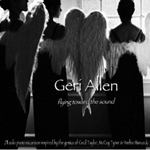 One of modern jazz's foremost pianists, Geri Allen exhibits a musical profundity that is coupled by lyricism and soul. Whether leading a trio of esteemed peers—Charlie Haden and Paul Motian—at that landmark venue, Live at the Village Vanguard (DIW, 2000), or giving homage to the obscure jazz matriarch, pianist Mary Lou Williams, with Zodiac Suite: Revisited (Mary Music, 2006), Allen is a composer/musician constantly gravitating towards new endeavors.

Such is the case with Flying Toward the Sound (a solo piano suite in eight refractions ), a work that gained momentum after Allen received a 2008 John Simon Guggenheim Fellowship for Music Composition. Inspired by three great pianists—Herbie Hancock, Cecil Taylor and McCoy Tyner—the project offers reverence to the spirit of their music, yet eschews mimicry. It sets its own course in a journey that is enigmatic yet personal, complex yet moving, and always evolving with Allen's own vision as she so eloquently states: "It's not like playing transcriptions; it's more about refracting the admiration and love I have for them through my own muse."

The suite is replete with Allen's cerebral compositional and improvisational vigor. Each refraction is prismatic—moments of balladry, grandeur, and abstractionism are contained in the stunning opening title, dedicated to Tyner. Rapid notes forge cascading movements, sheets of sound, and fluid runs in "Red Velvet In Winter (for Hancock)" and flamboyant blues/swing improvisation in "Dancing Mystic Poets in Twylight (for Taylor)."

Motion and spirituality are prevalent in "God's Ancient Sky," the sixteen-minute centerpiece where the pianist's keys travel over assorted soundscapes. Personal reflections are found in "Faith Carriers of Life," dedicated to mothers, and "Your Pure Self (Mother To Son)," for her son Wally—each intimating the pianist's inventiveness and sensitivity suffused in her swinging groove essence.

An added gift is found on the enhanced CD, with three short video excerpts from the film Refractions , by filmmaker Carrie Mae Weems, who collaborated on the project. Jazz has been quoted as being "music that walks a tightrope without a net." Allen's Flying Toward the Sound effectively fits that description—daring, vulnerable, and breathtaking.