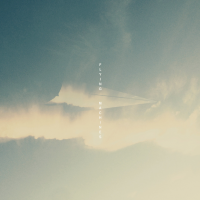 Flying Machines is the eponymous debut album by a group led by British guitarist Alex Munk whose late father Roger Munk was the inspiration for the project. Munk Senior was a leading figure in the design and construction of modern airships, otherwise known as Hybrid Air Vehicles. Munk Junior graduated in 2009 from Leeds College of Music with first class honours where he was awarded the prestigious Yamaha Jazz Scholarship. He then progressed his academic prowess at London's Royal Academy of Music where he graduated from the masters degree with distinction in 2011. He has performed with some of the top names in British jazz including Stan Sulzmann, Trish Clowes, Gwilym Simcock and Iain Ballamy.

The music presented here is indeed redolent of an airship; graceful, airy and serene. Two notes played on the guitar in rapid succession at the opening of "Tracks" herald a plangent feeling of space. The keen central riff builds with vital assistance from Conor Chaplin on electric bass, a member of the newly formed British jazz group Dinosaur, resolving into an irresistible groove, over which Munk lays down a fast and incisive solo. Matt Robinson leads with a quick fire piano melody on "Bliss Out" shortly joined by Munk applying a counter melody. It's here that Dave Hamblett's surgically precise drumming makes its presence known.

The languid guitar work on "As Long As It Lasts" evokes a feel of Bill Frisell with a touch of Pat Metheny all married with a subtly memorable melody line. Unsurprisingly, the tongue-twistingly titled "Emotional Math Metal" is a relatively heavy affair, satisfyingly imbued with tricky rock-infused riffs, thus indubitably entering into Allan Holdsworth territory. The languorous guitar on "First Breath" has an almost folky quality and clearly demonstrates how pleasing and versatile an electric archtop guitar can sound in expert hands.

"Lighter Than Air" has a two minute introduction, underpinned by a restrained funky bass line, before launching into the solid main theme and vibrant soloing from Munk. Like an actual airplane taking off, "Peace Offering" starts almost imperceptively, building to an ensemble crescendo and dying down once more, whereas "Stratosphere" goes straight into a guitar-led vamp ensued by more characteristically spacey axe work alongside Munk's multi-tracked accompanying sustained notes. The finale, "A Long Walk Home" again draws its influence from Pat Metheny, Munk's guitar emulating that maestro's limpid, fluid tone.

Whilst this album is labelled "Self Produced"—it was crowdfunded by a Kickstarter initiative—it's a very superior outing by a talented group, sporting seductive and original compositions throughout. Undoubtedly Flying Machines is heading for great heights.