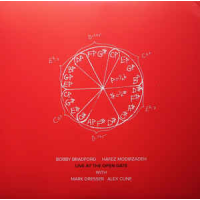 Veteran cornetist Bobby Bradford's penchant for conversational give and take in tandem with another horn is much in evidence on this 2013 live date from The Center for the Arts in Los Angeles. And in alto saxophonist Hafez Modirzadeh, a Professor of Creative/World Music at San Francisco State University, he has found a foil who at times recalls his erstwhile employer Ornette Coleman in his insouciant garrulousness and even evokes his elemental country blues wail. Vastly experienced bassist Mark Dresser and drummer Alex Cline complete the quartet in a program of eight cuts, six authored from across the band, with two spontaneous creations, on this limited edition LP.

Three selections start with mercurial dialogue between Bradford's darting cornet reveilles and Modirzadeh's vocalized cry. Of these Bradford starts "HA^BB" by intoning the titular phrase and then giving a blues shout before a brief duet with Modirzadeh. The a cappella horn interplay continues unabated on the following number only to resolve into Bradford's classic proud but melancholy "Song For The Unsung." Also striking, is the melodic nature of the improvisations and impromptu harmonies and interjections. That's as evident on the collective "Reprise" which finds the unaccompanied horns in another downbeat exchange as on the charts.

Pick of the bunch, Cline's opening "Steadfast" boasts a lovely languid bass, introducing a stretched out pulse which promotes a further loosely expressed unison. Both Cline and Dresser prolong the spacious motif, but intersperse flurries of intensity building to a short-lived peak before settling back into the initial laid back resonance. Although there is barely a hint of extended technique, the play of both is informed by their backgrounds, most notably on "Dresser Only," a bass solo full of juddering timbres, high harmonics contrasted with buzzing thrum and stumbling rubber band twang. But even here fragments of melody surface. Several of the tracks seem to be excerpts from a longer performance, but nonetheless retain enough coherence to be well worth investigating.