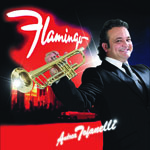 Back in 1974, a French daredevil named Philippe Petit brazenly high-wire walked across the span of New York's Twin Towers. He electrified the pre-internet, pre-YouTube world by spanning the buildings on a ¾" wire cable eight times; a feat of incredible skill, athleticism and bravery later detailed in his book, To Reach the Clouds (North Point Press, 2002). With Flamingo Italian trumpeter Andrea Tofanelli magnificently performs his own incredible high-wire, high-note performance with similar bravado and trumpeting brilliance.

Tofanelli has scaled the heights of his instrument and the trumpet world, with a near-superhuman ability to take the trumpet into and beyond the rarefied realm frequented by the likes of Maynard Ferguson, Cat Anderson and Bud Brisbois. No gimmicky squeak artist, Tofanelli shows that he is a pure musician—and magician—in any register. He goes where no one has before, up to the fringes of auditory recognition.

Flamingo kicks off with a hip Latin rework of Domenico Medugno's '60s hit "Volare." The wordplay here is that volare, in Italian, means "to fly," and Tofanelli soars beyond the stratosphere on this and virtually every cut on

Tofanelli's ability and restrained taste on flugelhorn shine beautifully. "Father" and "Dania's Theme" show that he has the intelligence and artistic heart to make it always about the music, the phrase and the ensemble, and not only the register. He avoids the temptation to take the marvelously mellow flugelhorn and scream shrilly on it, as some do. And, to his credit, this screamer can cook; his jazz chops are stellar on "To Bop." "Who's Your Daddy?," a Latin burner with Arturo Sandoval-esque overtones, completes what is a trumpeting "tour de chops." Compared to Tofanelli, any trumpeter can be tossed that query by Tofanelli. This babbo (daddy) can ask that question without reservation.

The ensemble gathered for these sessions supports Tofanelli with flair on "Deal With It." The charts seem to have a European flavor, while the playing is swinging, intense and just-right tight. The band frames Tofanelli with energized, fiery support throughout.

The production values are very good, certainly a challenge given Tofanelli's powerhouse performance.

Ferguson, Anderson and Brisbois must be smiling in the "Upper Room," knowing that the screaming torch passed on is in such marvelously talented and musically artistic hands. Tofanelli can easily add his name to these greats in the pantheon of scream. While music lovers and musicians of all instruments will probably dig the artistry here, trumpeters will surely sit in awe of the talent, skill and musicianship of Andrea Tofanelli. A sky-high phenomenon.