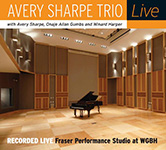 Creating an intriguing program and a well-balanced live set is an art form in and of itself. This becomes all the more challenging when dealing with small group formats, such as duo or trio settings. Bassist Avery Sharpe—best known for his work with McCoy Tyner in the '80s and '90s—proves to have exceptional skills in this department, in addition to his more obvious abilities as a supremely talented bassist and composer. This seven song program—recorded live at the Fraser Performance Studio at WGBH Radio in 2008—contains a little bit of everything. Nods to former employers, like Tyner and Yusef Lateef, are mixed in with sharp Sharpe originals, a solo bass performance, a mellow tune written by pianist Onaje Allan Gumbs and a metric-reinvention of "My Favorite Things."

The set begins with Tyner's "Blues On The Corner." Drummer Winard Harper stirs things up behind Gumbs and Sharpe and then moves to a solid swing feel when the soloing starts. Gumbs has a tasteful, measured touch that shines throughout the album and is on full display here. Harper gets a little room to cut loose, as he trades fours in the latter half of the song. Gumbs' "Morning Glow" is built on inviting harmonies and features an easygoing melody. Gumbs and Sharpe blend beautifully here and Harper is appropriately unobtrusive and extremely supportive. Sharpe's "OH NO!" features a hip head delivered by piano and bass. Gumbs solos without drums and bass behind him and Sharpe's solo segues from an impressive burning display of chops right into the pocket. Harper's soloing comes last and he starts out with a very musical, melodically-based solo, builds into a fiery display of technique and ends with a tension building press roll.

Lateef's "Morning" begins with a one note piano vamp, tapping out a Morse code-like rhythm that is trance-inducing. Things build around this and Sharpe's sound seems fatter here as he delivers a deeply spiritual melody. His soloing here, demonstrating his outstanding arco work, is the highlight of the song. "I Understand" is a rhythmically engaging solo bass performance and the melodic/rhythmic hook that comes in throughout the song is exciting and memorable.

"Dragon Fly," the penultimate performance here, features some darting lines—perhaps meant to represent the insect at hand—and ends in a stormy display of sound. A funky riff in seven sets off the journey through "My Favorite Things," which closes out the set. An off-kilter delivery of the melody leads to a hard swinging section of music, but the excitable feel at the outset returns and keeps things interesting. Sharpe's clever reworking of this song is the last of many great musical ideas on display throughout this live recording.

Blues On The Corner; Morning Glow; OH NO!; Morning; I Understand; Dragon Fly; My Favorite Things.