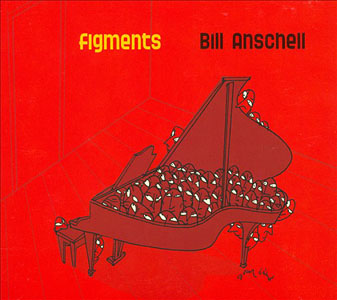 Bill Anschell is a lot of things. He is house pianist and mainstay at Origin Arts, showing up on a wide range of projects. He also contributes to this publication, writing with grace on craft of jazz. But, late at night, he is a musical James Joyce, spinning musical thread off the top of his head. And so he does on Figments.

Recorded over a series of late nights, after practicing his chosen craft, Anschell clears his mind and...begins to fool around, but Anschell's "fooling around" amounts to a postmodern study of American music. When recording "What's Going On," Marvin Gaye recorded saxophonist Eli Fontaine while he was warming up. Gaye used some of this "warming up" to introduce the now famous social anthem. When Fontaine heard it, he tried telling Gaye that he was "just goofing." Gaye told him "you goofed off exquisitely." Bill Anschell, too, goofs off exquisitely.

His subjects or "Figments" range from his deconstructed "My Heart Belongs to Daddy" to a rollicking stride-piano rendering of Arlo Guthrie's "Alice's Restaurant." Anschell sits down, stream-of-conscious, and plays what first comes into his head, modulating his message in real time, allowing whim and fancy to inform his direction. And those directions are many from the heroin-loaded Bill Evans' introspection of "All My Tomorrows" to a celestial brush with the Eagles' "Desparado."

Anschell goes all John Cage with a delightful prepared piano reading of Joni Mitchell's "Big Yellow Taxi," easily the most inventive of his ruminations. Blood, Sweat and Tears' "Spinning Wheel" recalls a Dave Frank left hand, while the standard "Willow Weep for Me" is a fragmented Monkian dream given leave to the muses of the wind.

Anschell hits a walk off grand-slam with Figments. After his collaboration with saxophonist Brent Jensen on We Couldn't Agree More (Origin Records, 2009), we should have expected it.

My Heart Belongs to Daddy; All My Tomorrows; Alice's Restaurant; Big Yellow Taxi; It Never Entered My Mind; Willow Weep for Me; Spinning Wheel; Across the Universe; Honeysuckle Rose; Desperado; I'm Getting Sentimental Over You; Ask Me Why.