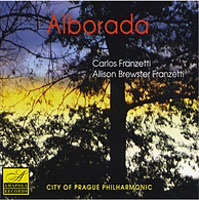 Pianist Carlos Franzetti's versatility is one of his many virtues. Few artists could pull off a solo piano project like Mambo Tango (Sunnyside, 2009), and then turn right around and create such moving music for orchestra and piano. Fortunately, Franzetti has the talent, drive and discipline to match his ambitions and Alborada is the proof.

Both Franzetti and his wife, Allison Brewster Franzetti, alternate between the podium and the piano bench throughout the album, and share a similar philosophy about the overall arc of these works. They seem to be in complete agreement that mood should win out over muscle and, while they get their fill of solo space, both pianists wisely prefer to integrate their playing into the overall orchestral web of sound, rather than forcing it to stand too far apart from the general atmosphere of each piece. Some of the music has overt Latin ideals, like Franzetti's tribute to author Gabriel Garcia Marquez ("Mombosa"), while other pieces are more European at heart ("Illuminata"). The latter number moves from a menacing place to placid impressionism and beyond, while the former stays the course that's set from the beginning.

The funky orchestral patterns on "Mirage" almost sound like a vastly reworked version of the rhythmic landscape from Freddie Hubbard's "Red Clay," and Carlos Franzetti takes things further afield into fusion territory with his Fender Rhodes work. "Pasacaglia" is breathtakingly gorgeous and cinematic in scope, and the balance between the orchestra and Allison Brewster Franzetti's piano is simply perfect.

The rhythm duo of bassist Robert Balzar and drummer Jiri Slavicek work their way into the music in subtle ways during the majority of this music, but their presence is essential. They add a little bounce to the music ("Iguazu"), deliver superbly understated swing on the trio-meets-orchestra music of "Song Without Words," and provide finishing touches in other places throughout the album. Maurice Ravel and Bill Evans were the primary inspirations for the A and B sections (respectively) on the title track, and this piece proves to be a wonderful showcase for the female Falzetti.

"Serenata" sizzles with the heat of Latin America and Allison Brewster Franzetti's playing is elegant, yet enticing, as she delivers the most passionate piece on the album. The final composition on the album, "For Ever Milton," is dedicated to Milton Nascimento, and a bit of a Brazilian funk hybrid feel underscores the orchestra and piano. Alborada is truly a triumph for the Franzettis, and a fine example of how jazz and classical can meet on common ground without giving up their own identities in the process.