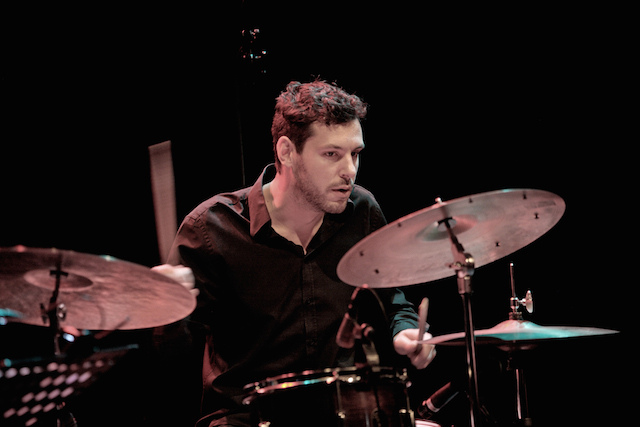 The first was that considering current performers, experimentation and ongoing tradition, the Netherlands is obviously one of the per capita international leaders regarding the size and scope of a national jazz scene.

Also, it was apparent that Rotterdam is consistently growing out of Amsterdam's huge shadow as a global tourist destination in its own right, enjoying numerous infrastructure improvements and innovations throughout the laid-back industrial port.

Like the city, Jazz International Rotterdam continues to make big strides as a major festival in territory known for the North Sea Jazz spectacular in July, probably the premiere jazz festival in Europe's wide western sector. JIR provided the same top quality headliners on a smaller scale but in an often more comfortable environment.

Stirring performances by Ben van Gelder's quartet featuring Ambrose Akinmusire, the Mark Schilders Pack Project, and Krupa and the Genes provided indisputable back-to-back-to-back evidence of both the Netherlands' and this festival's impressive foundation.

A primary reason for the festival's success comes through the support of various municipal sponsors or corporate type patrons. Director Mijke Loeven said that she was very grateful for the sponsors' ongoing dedication—and a shared vision that includes jazz as a cultural focus.

"We work together very closely; there are no egos involved. It's all music, and more important for Rotterdam, it's all about building audiences for that music," observed Loeven. "I'm very happy about that. We call it the Rotterdam model, where you just shift the focus and work with each other. We help and support each other and we share financial risk. It's a marvelous thing to do."

Evidence of that community vision's validity resounded during a performance by Dutch drummer Schilders, an emerging player chosen by JIR for the Pack Project, a subsidy that includes funding and promotion for awarded artists to create bands and to compose commissioned concerts on their own terms.

Schilders, who also earned grants for study at New York's New School, got a warm reception from the Saturday schedule's largest audience, which overflowed into the main hall and verified his reputation for quality shows.

Still, introductory movements were of the type that grow with familiarity but can take a while to align with new listeners. Jazz means plenty of good things, even if it ain't got that swing, but most early evening sets needed high energy at a time when many people wanted to initiate their festivities with a jump start.

Thus, the mood chilled a bit for a reality check after extended exploratory motifs drew out a little too slowly and impatient shifting was observed in many seats. Soon enough, Schilders' toms rolled in nicely and the tempo tripled behind bassist Clemens van der Feen. The groove grew until everyone paid attention again. Original songs "Sahara" and "Black Hole" went over well.

Guitarist Jesse van Ruller established an effective presence, though some of his delayed effects picking missed the mark in a solo that stretched a bit thin. Bram de Looze played impressive supporting keys and piano, often simultaneously. Most of the set was well-paced and the band rose to a fine finale.

The 26 year-old Schilders' development must still be considered the old, clichéd work in progress, but he displayed promise as a composer. An informal exit survey indicated, by a wide margin (18 of 20 men and women), that the audience was impressed and very satisfied.

"It's very important to give the stage to young talent," said Loeven. "We chose Mark and gave him the opportunity to transform from a brilliant, sublime drummer into a composer and bandleader. This was very scary for him, as well as for us."

We gave him the time and room and money to do that, and try and help him along with this process. We will help him make a record and go on tour. We were so proud because at the rehearsal we saw somebody blossoming and we were really moved with what he came up with. We think that's worth it."

"Of course, we also need famous names to sell tickets," Loeven concluded, "but the idea was to present a new talent on the main stage at prime time Saturday night because if you do it, you want to do it right."

Schilders may benefit from further ripening experience, but overall his efforts have already proved worthy of the support. Through the help of IJR and the awareness of Rotterdam's fan base, this year Schilders did indeed do it right.

Immediately after Schilders finished, numerous people bolted for the door. This was undue to any displeasure or emergency bathroom break. The reason was a good one, as popular home grown saxophonist van Gelder held court with his quartet in a small, very comfy theatre that filled up fast; guest star Akinmusire had a lot to do with that.

Van Gelder might think about trying to get additional mileage with a little bit more of his resemblance to Jamie Cullum's smooth style. Not that Gelder lacks personality or proficiency of his own. Van Gelder's set opened with the saxophonist and Akinmusire harmonically hypnotizing the front four rows of the audience with whisper-like wisps of briefly intertwined passages. There was a subdued orchestral quality to the duet, like Miles Davis' Sketches of Spain (Columbia, 1960) in shadows, showcasing the depth of their instruments.

Earlier, down in the mezzanine, Schilders and his relatively new group had begun this hazy harmonic path with success; frequent collaborators van Gelder and Akinmusire further illuminated the journey. Akinmusire took the first major solo, and as van Gelder accompanied him leaning on a wall from the sidelines it was optimal—no frills, just jazz horn magic time, the stuff that dreams are made of. The crowd simply sighed and moved their heads.

Sound in the shoebox-shaped structure, used primarily as an auxiliary film theatre, wasn't perfect but it was still clear enough to display individual tonality— something each performer had in abundance.

While aware of comparative merits and significance, it is not inaccurate to imply that there were, due to the small, well-padded theatre sound, striking similarities to those storied Miles Davis recordings from the ballrooms of New York.

When van Gelder and Akinmusire initially blew across the flats during their second set like subdued, stormy sunlight they delivered the the best arrangement of the evening, which said something sensational on a top-quality night like this. Even the rhythm section of contrabassist Matt Brewer and drummer Craig Weinrib stood out on reflection, in a program featuring many excellent musicians.

Said excellence was exhibited by Krupa and the Genes, a wonderfully wacky seven-man crew featuring two founding drummers (Joost Patocks and Stefan Kruger), two guitarists (Anton Goudsmit and Rafael Vanoli), two saxophonists (Jasper Blom and Maarten Hogenhuis) and bassist Sean Fasciani. The band combined the best garage band sensibilities as a thundering herd, with plenty of humorous interludes just crazed enough without pushing it too far. For this CD release party they closed the show with hard-rocking funk that chugged along with a bombastic, bossa nova bottom.

The set's climactic numbers featured vocalist Minyeshu, who reached amazing vocal points with an ethereal warble. Even if you didn't understand thirteen words of Dutch, it all made sense.

They peaked when Goudsmit, ace figurehead of the popular band The Ploctones, hit his percolating pedals, like a North Sea Moby Dick, for more Zeppelinesque effects on a hollow bodied blonde Gretsch. If there is still such a thing as acid rock, then maybe this was mushroom rock. The Krupa crew provided a sharp midnight edge, and a very nice way to end the night.

As often becomes an unfortunate example on the economics of today's concert market, some solid acts played to minimal audiences. Performers like the BVR Flamenco Big Band and Batik got loving applause but deserved further fanfare. Still, most shows were crowded overall, and lines for a nice selection of food and drink concessions were always busy. The festival may outgrow the venue someday but for now a little standing room overflow is the mark of justified ticket demand.

Festival Jazz International promotes most of its concerts throughout the year in Lantaren Venster—a pristine, relatively new theatre complex with a far higher comfort level than standard music venues. It is fully packed for many shows on a regular basis. The FJI project also produces frequent concerts at alternating locations—historic or brand new—throughout the city.

The jazz scene in Rotterdam is certainly no one-trick pony, as the waterfront skyline and vibrant sounds along it demonstrate. Jazz International Rotterdam continues to prove that besides artistic appreciation, jazz often provides a pure and powerful cultural influence.