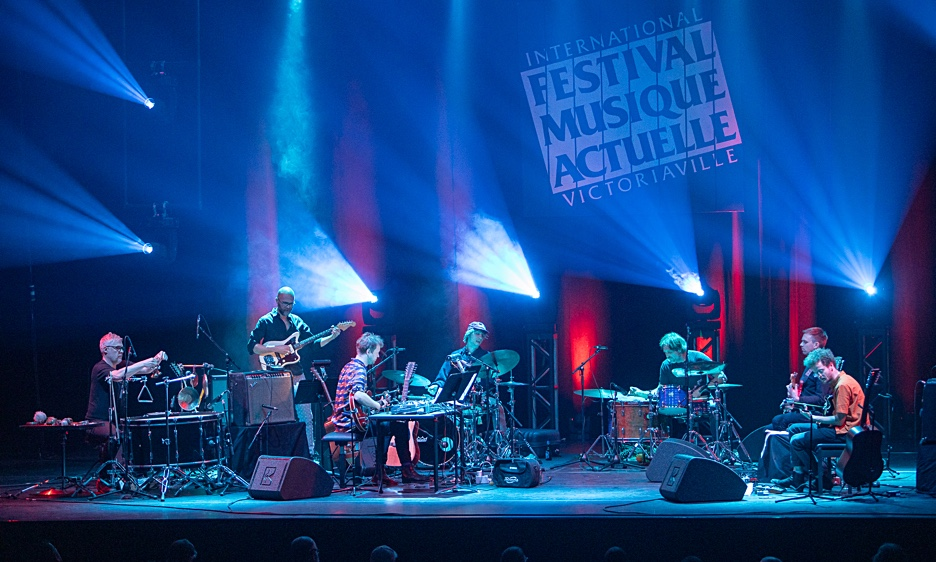 There was a lot of positive buzz leading up to the 35th edition of the Festival International de Musique Actuelle de Victoriaville. On paper, the schedule looked very strong. Looking back over past editions of the venerable festival, one can see a general movement from the early editions, which featured mostly Quebec artists, through the 1990s, with its larger focus on free jazz and its offshoots. Starting in 1999, the first year I attended the festival, the focus switched, or perhaps widened, to include more electronic music and somewhat less jazz influenced music, although that has always been part of the schedule. This year's program, however, harkened back to the 1990s, with more performances by musicians coming from jazz than we have seen in recent years. In addition, the schedule included a first-time appearance at Victo for the Bang on a Can All-Stars and a number of world and North American premieres.

The first two days of this year's FiMAV have lived up to the buzz.

It is custom that Thursday evening's opening concert at 8 o'clock features an ensemble from Quebec or the rest of Canada. This year, Vancouver cellist Peggy Lee presented her tentet playing music from their recording Echo Painting on the Songlines label. The music has an open Americana feel, much in the vein of Robin Holcomb. It might seem too obvious an influence to cite, given that Holcomb's husband, keyboardist Wayne Horvitz, is part of Lee's ensemble, but it's there, for sure. Horvitz and drummer Dylan van der Scheyff as well as the string section of Lee and violinist Meredith Bates provided a densely-textured but seemingly flee-floating base for solos (trumpeter Brad Turner and tenor saxophonist Jon Bentley stood out) and ensemble passages.

Quite surprisingly, New York's Bang on a Can All-Stars had never played Victoriaville, nor Quebec, before this weekend. For this performance, the seven-piece ensemble performed music from their "Field Recordings" project, in which they commissioned various composers—Christian Marclay, Julia Wolfe , Rene Lussier, Nicole Lizée, Michael Gordon, etc.—to compose pieces based on and incorporating field recordings. The resulting compositions were playful and inventive, as was the performance. Marclay's piece included a film collage comprised of movie scenes: Bruce Lee, Jack Nicholson drinking a glass of water, the Benny Goodman Story, feet moving in various ways, needles dropping on turntables. The musicians integrated quite agreeably with Marclay's sound track, as they did with those of the other composers in the project. It was a true pleasure to finally see this group at Victoriaville. Long overdue.

Political Ritual, the duo of Maxime Corbeil-Perron and Felix-Antoine Morin closed Thursday's program with the world premiere of music composed and improvised upon for a new visual projection. Coarse and granular, the music was beautifully textured and unbearably loud. Friday's program started off with a charming set by the duo of Elena Kakaliagou (French horn and voice) and Ingrid Schmoliner (prepared piano) playing Austrian and Grieek folk songs. Ideal for an early afternoon concert.

The duo of Klimperei (Christophe Petchanatz) and Madame Patate (Émilie Siaut) gifted the audience at the Colisée B at 5 o'clock on Friday with a whimsical, playful, and totally musical set of music inspired by and (I'm not sure) partially comprised of French folk songs. The duo deflty incorporated electronics with guitar, chimes, harmonica, and electronics, melodica, and voice, and I, for one, was completely charmed.

Friday evening's performances started with a world premiere of "Birds of a Feather," a work by Montreal-based musician and composer Rainer Weins. The musicians in his thirteen-piece orchestra were given bird songs and calls to learn, and using their interpretations, Weins composed the piece. This was a concept that could have gone either way for me. Happily, I was thoroughly charmed by what I heard, as was everyone I spoke with afterward. The music was incredibly textured and precise, the transitions between sections were well-thought out, and the musicians were more than up to the very challenging score. Navid Navab's work on homemade electronics (with flying motions!) stood out in an outstanding ensemble performance.

Double bassist Barre Phillips graced the stage at Victoriaville once again with a solo set that was incredible from both a technical and musical point of view. Phillips' playing was not only technically brilliant and inventive but also deeply sensual, presented with gracious and warmly humorous comments between pieces. Phillips has a long history with the festival, and it was a privilege to see him again. The concert was recorded, so we may see a release on the Victo label sometime soon.

Having seen the duo of Peter Brötzmann and Heather Leigh on two previous occasions, both in 2017, I was curious to see what they would do when joined by the Prince of Darkness himself, Keiji Haino. Typically, at least in my experience, Brotzmann plays melodies—old jazz tunes, children's songs—and Leigh provides texture while also pushing and prodding up against Brotzmann's playing as she feels that the occasion demands. The performance started out promisingly enough, as, bathed in blue light, Brotzman launched into the melody of "The Man I Love," Leigh hodking on a two-chord figure while Haino blew some kind of a toy horn. The tension built, the romanticism of Leith and Brotzmann cut through with a keening wail. Unfortunately, Haino then brought out his guitar.

I have seen Keiji Haino on a number of occasions, and I have generally enjoyed and found value in his aesthetic and in his work. Not tonight. Dynamics way out of whack, uncontrolled feedback, a clumsy touch on the strings—It is my feeling that any halfway competent improvising guitarist could and would have added more to the performance than what Haino provided on this occasion. The disappointment was sharpened by how sublime I found the playing of Leigh and Brotzmann. This was a grouping that I thought had potential for interesting results. I guess the results were interesting, but not in the way I had expected.

But that's the beauty of Victo. You don't know quite what you're going to hear at this festival. Sometimes, you're disappointed. Sometimes, you're taken away by someone you've never heard of. And there's always another concert to come. So far, the pleasant surprises easily outnumber the unpleasant ones, and the rest of Victo also promises good things. My review of the final two days of the festival will follow In a couple of days.