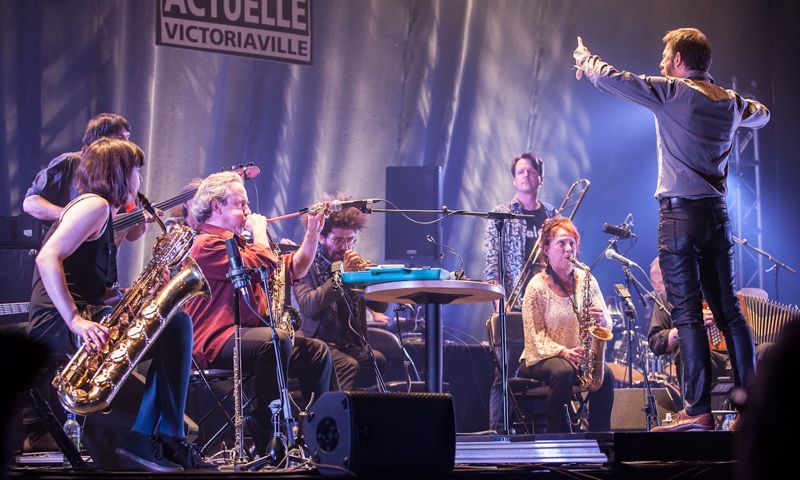 The 32nd edition of the Festival International de Musique Actuelle de Victoriaville began with a performance of new compositions by Norwegian guitarist/composer Kim Myhr with Montreal's Quatour Bozzini in the town's new cultural space, Carré 150, an impressive $28 million structure that stands on the site of the former Cinema Laurier, one of the performance homes for the festival for many years.

If we're looking for themes, the first two days' concerts featured the human voice and by extension, the notion of breathing and the breath mechanism. Both the Bozzini/Myhr ensemble and the Julie Tippetts/Martin Archer Ensemble that followed included vocalists who incorporated poetry and song into the performances. The music of Bozzini and Myhr, who did two pieces, one by Christian Wolff and the other by Myhr, was spare and slow-moving, but insistent and hypnotic, with Montreal-based vocalist Erika Angell reciting the poetry of the British poet Caroline Bergvall. The following performance, the Tippetts/Archer group was performing live for the first time ever, despite the fact that they have been making music in the studio for a decade and a half. Their music is very much in the prog-rock sphere, with elements of the blues, a big bass sound and electric keyboards underpinning the group sound and providing a strong foundation for Tippetts' soaring voice.

Thursday's midnight show was a North American premiere for the Swiss duo of Lucas Niggli and Andreas Schaerer, whose set of drum and voice improvisations was full of intelligence, humour, and high-speed responsiveness. Niggli has impeccable touch on the drums, whether using normal drumsticks, mallets, and brushes or the less common objects that he employs, and Schaerer has a full bag of vocal tricks, including bird calls, tongue-popping, and glossolalia, maintaining total musical coherence while having a lot of fun doing so. This was a crowd-pleasing set, and will probably go down as one of the more memorable of concerts ever to be presented at Victoriaville.

This year FIMAV has cut down slightly on the number of concerts, so that there are now only two afternoon shows rather than the three of years past. As usual, however, the music in the early afternoon shows give the opportunity to ease into the day with "lighter" sounds, at least in terms of musical density, if not interest. Such was the case with tuba trio Microtub, comprised of Ferran Fages, Peder Simonsen, and Martin Taxt and including three of the four microtonal tubas in the world in an affair that required close listening to subtle variations in tone and timbre. French electroacoustic composer Berangere Maximin was focussed, controlled and succinct in her set of four real-time compositions with laptop and electronics that employed the use of natural sounds and pulsating drones that had life and breath of their own.

The three performances on Friday evening all featured Quebec and Canadian musicians. Electric bassist/composer/educator Eric Normand lives in the small town of Rimouski, Quebec, where he leads a group called GGRIL, comprised mainly of amateur musicians from the Rimouski area. In starting GGRIL a few years ago, Normand has created an enormously important community music project that is reinvigorating the improvised music scene in Quebec. GGRIL were joined at Victo by veteran Montrealers Jean Derome and Joane Hetu and Ensemble Supermusique, for an improvisation conducted by French guitarist/composer/improviser Olivier Benoit. There was no vocalist; it was the music itself that breathed and vibrated to the rhythm of the breath and beating of the heart. Benoit's choice of moves for the musicians was impeccable, as the hour-long piece built up slowly to two climaxes, the tension palpable throughout. This was easily the best improvisation by a large Quebec ensemble heard here in many years.

Throat singer Tanya Tagaq and her improvising trio with drummer Jean Martin and violinist Jesse Zubot, are a sensation. Despite winning the 2014 Polaris Prize, a Canadian popular music award, for their album Animism, the trio has not abandoned their improvisational approach. They appeared at Victoriaville in 2010, but this time were joined by guest Montreal guitarist Bernard Falaise and choir leader Christine Duncan, who led the Element Choir, a group of some thirty voices from the Victoriaville region, some professional, some amateur. This grouping had a lot of moving parts, and the potential for disaster was quite high as these things go, but the performance was very successful, Duncan managing to blend her instrument —the choir—with the other musicians—no mean feat in a totally improvisational context. If one is to judge the health of Canadian improvised music by this and the preceding performance, the patient is doing quite well, indeed.

Friday closed out with a wonderfully funny, raucous set by Fet.Nat, a rock group from Gatineau, Quebec (across the river from Ottawa), fronted by dadaist wild man JFNO, who good-naturedly provoked and prodded the audience , who were enthralled by (and dancing to) a delightful blend of punk, funk, free jazz, and absurdist comedy.

This was a strong set of performances that bodes well for the final two days of the festival.