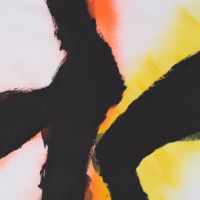 It's nothing new for Rob Mazurek to travel the road less taken. What's surprising is that he continues to locate so many alternate routes of expression; his creative compass pointing in directions rarely seen by others. Alien Flower Sutra , a (mostly) duo outing with Emmett Kelly, explores yet another artistic set of elements that should be un-relatable but are rendered quite the opposite.

The concept for Alien Flower Sutra has been a work in progress for some time as Mazurek tried and tested various ideas and components through his personal creative process, real-world performances and networking. Among the witnesses to the development of the project was guitarist/vocalist Kelly. Known primarily for his work with the rock group, The Cairo Gang, Kelly wrote the lyrics for several tracks while Mazurek penned the compositions.

Kelly's ethereal vocals on the early tracks, "Back to the Ocean, Back to the Sea" and "Android Love Cry," at times merge with the electronics, creating an organic instrument that is both forlorn and agitating. "Bright Nights Havoc" brings in guests Guilherme Granado (São Paulo Underground) and Carlos Issa adding more layers of electronics and additional guitar. The result could very well be an alien version of music. "Of Time Wasted" opens with Kelly's acoustic guitar and a vocal that seems to be transmitted through ancient loop antennas. Brittany Mazurek lends her voice to the background of "Embryo Genesis," a cross between carnival and church music bleeding into Kelly's electronically spiritual reading on "We Are One." "Overture Towards the Beginning of the End of Time," a twenty-one minute instrumental epic, manages to be poignant through an almost constant wall of electronic buzzing.

Like much of Mazurek's later work, Alien Flower Sutra reflects the artist's affinity for the sciences, real and possible, along with a deep spirituality. All of that comes through in these pieces, each having its own sense of wonder as Mazurek explores the coexistence of humanity and the cybernetic structures that have been premeditatedly designed to replace its functionality. It's heady stuff and it works on more levels with each successive listening.

The CD and vinyl versions of Alien Flower Sutra include original paintings by Mazurek. It is a facet of his artistry to which he seems to be devoting a good deal of time and creative energy, and his visual work is indeed impressive.

Back to the Ocean, Back to the Sea; Android Love Cry; Blackout; Bright Nights Havoc; I Untied My Wrists; Of Time Wasted; Remember Nothing; Embryo Genesis; We Are One; Overture Towards the Beginning of the End of Time.