By Bruce Lindsay
September 17, 2014
Sign in to view read count 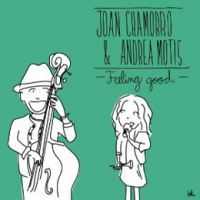 Feeling Good is well named: the feelgood vibe is strong and the love of music that reaches out from this album is pretty much guaranteed to leave listeners with a similarly good feeling. It's the second album from Joan Chamorro—bassist, saxophonist and director of Barcelona's Sant Andreu Jazz Band—and the band's star member, the teenage singer and instrumentalist Andrea Motis.

Chamorro's name may come first, but it's Motis' personality that shines through most strongly on Feeling Good. Chamorro can take much of the credit for this—he's mentored Motis and other members of the Sant Andreu Jazz Band for some years, creating a band with the talent and maturity that belies the ages of its members (who are between 9 and 20 years old). Chamorro and Motis recorded this album at a series of live concerts between February and August 2012, when Motis was 16. Although Motis plays trumpet on a few songs (her trumpet solo on "Solitude" is charming) it's her singing that gets featured here.

Motis' Sant Andreu bandmates appear on a couple of songs, including "Feeling Good" with the great Scott Robinson on tenor and trumpet. However, it's a core group of excellent Spanish players—Chamorro, pianist Ignasi Terraza, guitarist Josep Traver and drummer Esteve Pi (with bassist David Mengual joining in when Chamorro plays tenor)—that provides the crucial instrumental accompaniment for the singer.

Motis' voice has been likened to Norah Jones,' a reasonable comparison but one that doesn't do justice to Motis' vocal range. "Bésame Mucho" shows that she can swing, "Gee, Baby, Ain't I Good To You" suggests that she's a blues singer in the making. On "The Devil And The Deep Blue Sea" and "Lover Come Back To Me" she displays a knowing cheekiness reminiscent of R&B singer Julia Lee. Cut to the fragile cover of "Moon River"—with just her core quartet for company, Terraza and Traver playing with exceptional delicacy and taste—she makes Audrey Hepburn sound like Janis Joplin.

Comparisons don't retain their validity for too long when they refer to a teenage singer who's developing at speed. Two versions of "Lover Man," recorded just a couple of months apart, show how quickly things move. On the first, a lushly orchestrated '40s style version featuring a string quartet, Motis' voice has a naive, child-like, quality rather at odds with the lyrics' sentiments. On the second, Chamorro and Traver providing a sympathetic bass and guitar backing, Motis sounds more mature, more wordly—it's far easier to believe that she's lived the story.

Motis is already a big name in Spain, selling out major concert halls. She's still learning, still gaining confidence, but her talent is undoubted. Feeling Good is a fine album, but it's almost certainly just the beginning.

Feeling Good; Between The Devil And The Deep Blue Sea; How Insensitive; Lover Come Back To Me; Moon River; Love Me Or Leave Me; Lover Man; Solitude; Hallelujah; Easy Living; My Funny Valentine; Bésame Mucho; Sophisticated Lady; Gee, Baby, Ain't I Good To You; Lover Man; Lullaby Of Birdland.