By Budd Kopman
September 17, 2014
Sign in to view read count 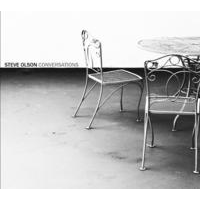 For his first recording as a leader, drummer/percussionist Steve Olson asked six of his friends to engage in completely unrehearsed and improvised duo "conversations."

Olson states in the notes that in his opinion, "the best music has an element of dialogue in it, both between the musicians, and between the players and the listener who is hearing and reacting emotionally."

The result of these encounters are fifteen tracks which strongly support his stance from both viewpoints, although much concentration is required of the listener. The aural textures created are, not surprisingly, sparse, but within a large sound stage, and relatively soft -there is no frantic blowing or drumming. Hence, careful listening is required, since the sound is not enveloping; the reward for such listening, however, is a mental envelopment that is quite satisfying.

Most of the tracks are between four and five minutes long, and thus allow time for development without overstaying their welcome. As the album proceeds, a very strong sense of anticipation is set up by the ordering of the tracks with respect to instrumentation and pitch. The lows are anchored (naturally) by the double bass (Michael Formanek), but also by the bass clarinet (Todd Marcus). The highs are delivered by (surprisingly) the bassoon (Andrew Delclos), trumpet (Dave Ballou), alto saxophone (Jarrett Gilgore) and percussion (Tony Martucci and Olson) with lots of light cymbals and high drums. Since there are more high-pitched tracks than low-pitched, and the record starts with a bass conversation, tension builds until a low-pitched track returns, after which there is clear relief.

Each track is attractive in its own way, and the pacing keeps the listener's attention not only on the current track, but also heightens the anticipation of what is to come. There is no wild blowing or frantic drumming, but often quasi- melodic playing and sensitive percussive accompaniment.

The titles, obviously added after the recording, many times give a hint of the track's nature, as in "Creepy Strut" (Formanek) or "Breath of Life" (Marcus). Marcus' lines are quite melodic in "Around The World," as are Delcos' in "Please Listen Carefully As Our Menu Has Changed." Irony is on display on both Martucci tracks, "Are We Swingin?" and "He Says Yes," as well as with Ballou in "They're So Nice."

Throughout is the presence of Olson, who proves to be a very sensitive and perceptive "conversant." Although it seems that most of the time he closely follows, on "Klangfarben" (Delclos) and "Opening Salvo" (Gilgore) Olson audibly pushes the conversation in a particular direction, to which the other player responds.

Fascinating musical minds are on display, and every moment is well worth the attention given.

I'll Find A Space; Around The World; Drop The Sticks!; Shhhhhh; Klangfarben; Creepy Strut; Are We Swingin? Harmolodically Yours; Breath Of Life; I Rest My Case; Opening Salvo; Smacks; Please Listen Carefully As Our Menu Has Changed; He Says Yes; They're So Nice.