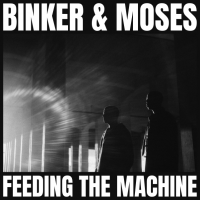 Many of us who are fully paid-up intravenous-feed junkies for Binker and Moses would be happy if the semi-free London duo stuck to their well-honed paradigm of acoustic visceralism until The Time Of The Last Persecution. Tenor saxophonist Binker Golding and drummer Moses Boyd, however, have been restless for a while, wanting to reconfigure their music. With Feeding The Machine they have done so, and radically, making electronicist Max Luthert an equal partner in this, their fifth full-length album.

Since emerging from singer Zara McFarlane's backing band, Binker & Moses have released the studio sets Dem Ones (2015) and Journey To The Mountain Of Forever (2017) and the live albums Alive In The East? (2018) and Escape The Flames (2020), all on Gearbox. While those albums are totally twenty-first century in their vibe, and amongst the most sublime works yet to be thrown up by the post-2015 alternative London jazz scene, they are rooted in analogue-age aesthetics and technologies.

We got hints of change with Binker & Moses' electronically dipped single "Village Of The Sun" (2020) and its loop-fried follow-up, "Feed Infinite" (2021), which featured Luthert. "Feed Infinite" now reveals itself as a track from Feeding The Machine, with Luthert a key creative collaborator rather than a post-production knob twiddler. The album retains the qualities which have endeared Binker & Moses to their audience—among them authenticity, rough lyricism and spontaneous invention—while embracing the possibilies offered by digital-age technology and software.

Most of what you hear coming from the modular are reconfigurations of acoustic saxophone and drums. "The only thing is it's so distorted, that you wouldn't recognise the acoustic sounds," says Golding. "I think the album for the most part has a really lonely feel. It's the loneliest of the Binker & Moses albums, despite the dance tracks, and I quite like that about it. It marks it out as different."

For his part, Luthert has been careful not to throw the baby out with the bathwater; he has built on Binker & Moses' sound rather than cutting it adrift from its provenance. Off the shelf bass/sub sounds were out and instead the trio settled on pure-sounding tones which, while they do transform often beyond recognition traditional saxophone and drums phonics, complement and re-contextualize rather than colonize and overwhelm.

With Feeding The Machine, Binker & Moses shift into a new world of minimalism, experimental electronics and what might be called sentient (as opposed to soma laced) ambient music. It takes nerve to make such a radical departure from a tried and tested recipe, but Binker & Moses have never been short on nerve.

Asynchronous Intervals; Active-Multiple-Fetish-Overlord; Accelerometer Overdose; Feed Infinite; After The Machine Settles; Because Because.