BY JERRY D'SOUZA
September 1, 2005
Sign in to view read count 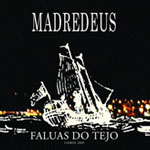 The story of Madredeus begins in 1986 when Portuguese musicians Pedro Ayres Magalhães and Rodrigo Leao came up with the idea of a guitar-synthesizer combination for their music. They also pulled in an accordion player and a classical cellist. Into this odd mix came Teresa Salgueiro, a nineteen-year-old who was singing fado songs in a bar. The band began rehearsing in a church called Madre de Deus, which became the inspiration for their name. Changes in personnel followed, but Magalhães (who actually left for a short while) and Salgueiro continue to be the crux of the band, now a quintet.

Fado is a Portuguese song form which dwells on the life of the poor and on the sea and especially the feeling called saudade: sadness, loneliness, longing, and even happiness. Guitars are an integral part of the band that accompany Salgueiro. Magalhães plays the classic Portuguese guitar, his sound a beautiful and sympathetic complement to the singer. Salgueiro has the voice, and she communicates emotions with a deep well of feeling. Her intonation and phrasing capture attention; whether or not you understand the Portuguese lyrics, you can't help but be drawn into the vortex of the song.

The impact is immediate as guitars and acoustic bass set up a gently rolling rhythm for "Lisboa, Rinha Do Mar (Lisbon, Queen of the Sea) and Salgueiro transfixes with her voice. The synthesizer is a concession to modernism, and while it may take away from the integral character of the fado, it blends in well on "Fado Das Dúvidas. But it is intrusive on the opening and the break of the title track, where it is not in consonance with the guitars of Magalhães and José Peixoto, who braid a rich tapestry. However, once the singing gets underway, it blends in and introduces an orchestral air.

This stands out as a haunting, lyrical album.