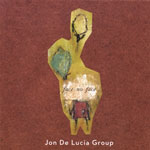 The proliferation of university-level jazz programs has created a groundswell of young artists, ensuring that jazz remains alive and evolving. Still, the cookie-cutter approach of some programs means that only an exceptional few emerge as distinctive voices; the rest are competent but unmemorable. That, along with the sorry state of mentoring in the jazz community and a weak club scene in most cities, has resulted in too many albums by artists who are not yet ready to be leaders. At times, saxophonist Jon De Lucia's debut is mired in some of these problems. But Face No Face also transcends them enough to suggest that De Lucia and his group are worth watching.

The beginning of "The Glass Bead Game is promising enough, with a lengthy David Binney-like riff carried by guitarist Nir Felder, bassist Garth Stevenson and drummer Ziv Ravitz. De Lucia's economical solo ultimately leads into a theme that's doubled by pianist Leo Genovese, acting as a rallying point for the second part, which is where it hits some trouble. It may have shifting bar lines, but it's still a conventional two-chord vamp, and even Felder's jagged solo can't save it from being overly ponderous. A third section where De Lucia duets with Genovese is more interesting, as the pianist proves an oblique foil to De Lucia's clear construction.

"Emptiness is altogether more satisfying, demonstrating a clearer group chemistry. The more open-ended nature of the piece allows the group to take considerable liberties as it moves from a bass ostinato supporting De Lucia's cerebral solo into a more swinging middle section that lets him shift gears. Ravitz and Genovese are particularly responsive. Felder's solo, beginning as a delicate duet with Ravitz, moves towards more angular territory once Stevenson and Genovese re-enter—reminiscent of Jack DeJohnette's mid-1970s New Rags (ECM, 1977) with John Abercrombie.

The energetic "The Open Eye should have closed the disc. De Lucia delivers his most passionate solo of the set, and Genovese sounds equally vibrant, while Felder ranges from Frisellian chordal work to a more direct post bop stance. The rhythm section is on fire throughout. But De Lucia and Genovese falter with a lacklustre duet of Harry Warren's "I Wish I Knew that diminishes the individuality demonstrated elsewhere.

Still, Face No Face has its moments. De Lucia and his fellow Berklee grads are worth following for the promise of their strengths, rather than being dismissed for their weaknesses.