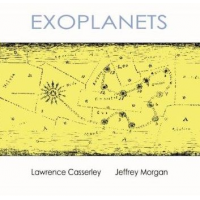 Exoplanets is an album which explores the darkness that is all around us. Is it all catastrophe and despair? Clearly not, because science transcends emotions, and happiness survives negative emotions. Each of the track titles refers to a planet, the sound is experimental and cosmic, from the "free jazz" school of expression. In our local galaxy, there are between 100 and 400 billion stars, and probably at least 100 billion planets. Around 3,500 exoplanets, planets that orbit stars other than our sun, have been discovered so far. Of these, about 35 are currently considered to be potentially habitable.

Multi-instrumentalist Jeffrey Morgan plays alto saxophone, piano and alto clarinet. Lawrence Casserley's Signal Processing Instrument makes no sound itself, but transforms in real time the sounds that Morgan plays. Together they create their own special sound-world, a planetary system of their own. Morgan and Casserley have worked together for many years.

Lawrence Casserley was born in England in 1941, and has been involved with electronic music since the 1960s. He has worked his way through analog synthesizers, building some himself, and later developed an original concept for the Signal Processing Instrument, which transforms the sounds of other instruments.

Jeffrey Morgan was born in the U.S.A. in 1954. He started playing violin when he was 10, and at 19 he was inspired by Art Ensemble Of Chicago, also Sun Ra, at which time he switched to focusing on the saxophone, trumpet, clarinet and the piano.