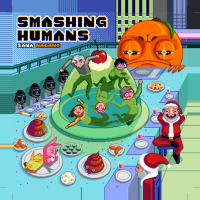 Violinist Sana Nagano is an idiosyncratic and accomplished artist who is immersed in New York's avant-garde scene. Her sonic experiments are an end in themselves, thrilling and provocative as well as quite intimate. Nagano's debut with her new quintet, the electrifying, Smashing Humans, expresses this singular vision to its fullest, creating a wholly absorbing work of rare beauty.

The cinematic "Humans in Grey" starts off with Nagano playing repeating scales that saxophonist Peter Apfelbaum echoes. The entry of the band heralds a riotous and passionate repartee with fiery tones and thunderous beats. After a series of boisterous and clamoring refrains, an eerie ambience is set as Nagano and bassist Ken Filiano's strings resonate against one another. Guitarist Keisuke Matsuno coaxes otherworldly sounds from his instrument as drummer Joe Hertenstein lets loose roaring polyrhythms. A melancholic violin melody and wailing saxophone enveloped in complex vamps conclude the tune.

This type of mercurial, evolving narrative characterizes all of the tracks on the album. This is expected as Nagano, herself, states that she was inspired both by fantasy stories and the current social climate. Thus she has created an alternative reality with her music.

The intriguing and dramatic "Heavenly Evil Devil" is intricately crafted and bristles with spontaneity. Members of the ensemble contribute free flowing individual trains of thought with angular lines. From a rousing duet between Nagano and Hertenstein to the emotive and visceral closing chorus the piece progresses intelligently and with surprising lyricism. Whimsey permeates the group interplay.

With Smashing Humans Nagano has recorded a brilliant and inventive suite perfectly suited for our surreal times. In addition to her ingenuity, what makes this release truly remarkable is the seamless synergy among her and the other musicians The result is a disc that is simultaneously urgent and timeless. It has all the elements to give it relevance, both now and in the future.