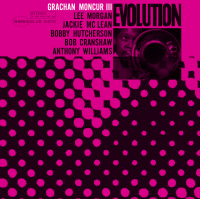 Recorded on November of 1963, the date features the horns of Jackie McLean and Lee Morgan, as well as Bobby Hutcherson on vibes who, in addition to solo contributions, provides most of the background comping that might ordinarily be provided by a pianist. This is one of the most far out offerings from Blue Note's classic period and is definitely not the hard bop more typically heard from the label in the early sixties.

When Moncur got the green light to cut his first album as a leader he had already provided compositions for Jackie McLean's One Step Beyond and had developed a relationship with Morgan, who admired his writing. What they turned in ventured from subtle free forms to strongly structured up-tempo bounces and as a whole it's perfection.

The album starts with "Air Raid," constructed with a variety of meters. Moncur's trombone playing is dynamic and precise. The music is out, but his playing is disciplined. Morgan's solo is perhaps the most un-Lee Morgan like thing he'd played to that point. For a trumpet player who's style was so distinctive it's a little disconcerting to hear something so stylistically uncharacteristic. Morgan himself felt that this date was among his finest recorded performances.

The title track is almost a dirge, with a very simple two-note foundation supported by Bob Cranshaw's bowed bass giving the soloists plenty of space to wander. And they do wander: McKlean, Morgan and Moncur take their turns, each weaving around the minimalist footer, but it's Hutcherson who captures the improvisational potential of the two-note structure with a spacey, eerily atmospheric, and slightly dissonant turn.

Side two (actually three and four on this two-LP pressing) picks up both the tempo and the compositional structure significantly, though without diluting the record's tip-of-the-spear modernism. "The Coaster" jams with Spanish blue overtones, Morgan's solo loosely echoing Sketches of Spain, although at a much faster pace.

But the true compositional heart of Evolution is the closer, "Monk In Wonderland," with an opening that could have been composed for Pee-Wee's Playhouse: an abstract children's theme that quickly gives way to a mixed tempo chord progression over which everyone takes a turn. It's an absolutely brilliant bit of music that brings out the best in the soloists. McLean in particular stays in closest contact with the comps, but stretches and pulls the chord structure in unexpected directions. Special mention should also go out to Tony Williams who carries a tricky rhythm almost entirely on the hi-hat and snare.

Evolution is a record of contrasts: It's both free and structured; it uses simple motifs to support complex ideas; and it's a portfolio of truly forward music that's delivered with the very traditional value of refined artistry. It's dissonant without ever becoming cacophonous. It must have seemed especially adventurous in 1963, but fifty-four years later it still sounds fresh and relevant. It's a classic in any format, but it's a special treat to hear it on Music Matters' perfectionist, all analog reissue. It's music that's unquestionably worth seeking out.