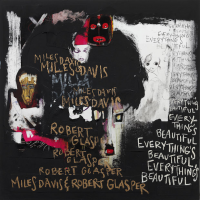 Miles Davis birthed cool in 1949 and nearly took it to the grave with him 52 years later. His first venture into hip-hop and last studio album, Doo-Bop, represented the least cool moment for America's icon of coolness itself. By the '90s, Miles' prowess as a trumpeter had only waned from legendary to excellent, but younger musicians had supplanted his position on the stylistic frontier, so his bid at the "street music" of his time came off as corny.

But though Miles was alienated in the realm of hip-hop, his influence pervades the genre in a myriad of ways. With the commemorative concept album Everything's Beautiful, producer/pianist Robert Glasper has set out to prove this point, curating the construction of 11 original pieces from snippets of speaking and playing that he gleaned from the trumpeter's Columbia/Legacy archives. Structured like a thematically cohesive version of Snarky Puppy's Family Dinner collaborations, the project's star-studded guest list attests to the breadth of Miles' legacy. Wrangling together artists including Erykah Badu, John Scofield, Illa J, Hiatus Kaiyote, Phonte, Bilal, Laura Mvula, and Stevie Wonder, Glasper has reworked the Miles Davis catalog into a hip-hop album that is actually hip.

That being said, Everything's Beautiful is not so much a Miles Davis record as it is a sprawling love letter that constantly references his work. The closest thing to a bona fide remix is the cosmic, shuffling, pseudo-cover of "Milestones." It is also the jazziest number, featuring Glasper's one explicit solo (though he noodles gracefully in the background of "Maiysha"). The pianist shreds with frenetic, bluesy virtuosity, making me wish he had left space for himself on every track. But it's obvious why he didn't: despite the show-stealing potential of each of the eclectic features, Everything's Beautiful is about Miles Davis, and his is the ego to be most heavily in each composition.

Instead of flaunting his guitar-god status, John Scofield takes a modest, laid back solo on "I'm Leaving You," content with animating broiling funk groove over which R&B singer Ledisi lays down a catchy hook. The track is upbeat and relaxed, but it comes as downright fiery in the context of this consistently chill album.

The vibe-centric chillness of Everything's Beautiful constitutes its most overarching and poignant allusion to Miles. After garnering critical acclaim with his acoustic jazz trio, Glasper earned mainstream recognition (and a Grammy) for his jazz/hip-hop crossover project, Black Radio (2012), but Everything's Beautiful marks his first full-fledged hip-hop project. The album's devoutly atmospheric approach, juxtaposed with hip-hop's present obsession with the hard, is analogous to the cool strain of jazz that Miles championed when mid-century bebop was at the apex of its hotness. So, in a sense, Glasper's hip-hop debut succeeds in making a very Miles-like statement.

The hardest moment on the album is Bilal's visceral verse on "Ghetto Walkin,'" but it still lacks all but a whiff of aggression. The beat carries over to "They Can't Hold Me Down," an Illa J feature named after the previous song's refrain. North Carolina rapper Phonte then spits powerful, ruminative bars on "Violets," perhaps the most memorable song on the album. Glasper produces a spare, mid-tempo beat over an outtake of Bill Evans playing the haunting, colorful changes that billow gorgeously beneath Miles' iconic "Blue in Green." Phonte references the piece in his first poetic couplet: "Blues and greens and violets, eyes get/Heavy with the weight of the world around the iris."

Glasper also samples the unmistakable trumpeting of Miles himself, overlaying spacious phrases on the closing track, "Right On Brotha," but the producer seems just as transfixed by Miles' speaking voice. "Talking Shit" features three minutes of the trumpeter's signature rasp as he instructs the drummer Joe Chambers on how to, effectively, deliver a hip-hop beat. The clear implication of the title track is that Miles presaged the repetitive pulse that defines a hip-hop groove.

Everything's Beautiful is therefore a fitting homage because it tastefully demonstrates that the superstar so often dismissed as retro is actually as relevant as ever to American music and pop culture. It's also good music! The album doesn't so much reward multiple listens as it does mandate them; one to search carefully for the subtly crafted details that develop the music with a quiet authority, and another to zone out and let the soothing vibes sink into your bones. This is music for a contemplative car ride or a warm summer night. Miles would dig.

This article first appeared at That Music Magazine.

Talking Shit; Ghetto Walkin'; They Can't Hold Me Down; Maiysha (So Long); Violets; Little Church; Silence is the Way; Song for Selim; Milestones; I'm Leaving You; Right On Brotha.