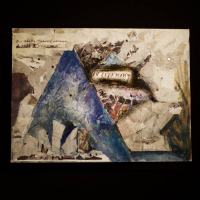 On Ceremony reunites Fisher-Lochhead's Large Ensemble with some minimal reorganization, notably the absence of drummer Evan Hughes. Fisher-Lochhead's decision to spread percussion parts among nine of the ten group members, works very effectively to convey the composer's idea of creating a varied but subtle rhythmic feel in the multifaceted, improvisational music.

The title track and "Rhythmic Minis" are fine examples of structured improvisation, a hard process to manage with an ensemble of this size, but Fisher-Lochhead does an excellent job in letting all the voices be heard while still providing some involved interactions between the players. About thirteen minutes into the long "Ink Minnesota" Fisher-Lochhead transitions from a pastoral setting into free playing before returning to the main theme. "Rhythmic Interlude" combines exotic flavors with just a bit of big band fastidiousness and a slightly disjointed, and forlorn melody. The album closes with the brief and melancholy "Thai/Disarmament."

Fisher-Lochhead is part traditionalist, part transformer and like his previous large ensemble project, his work is highly aspiring and equally appealing. He doesn't throw improvisations around like a clinical exercise but uses it as the means to an end. On Ceremony can be thick with textures at times and sharp, and to the point at others. The players are first-rate and the written material is sophisticated without any pomposity. When Fisher-Lochhead allows the higher degrees of free playing step to the front, we're as ready as needs be for his spontaneity and arrested by his effective use of improvisation as a link to contrasting themes. On Ceremony is a classy and adventurous recording in every regard.