By JOHN EYLES
February 17, 2019
Sign in to view read count
In 2016, English guitarist John Russell and Irish pianist Paul G. Smyth set up the independent Weekertoft label to release music they had been involved in, including recordings made at Russell's longstanding monthly Mopomoso concert series or annual Fete Quaqua festival. As the label reached its third anniversary, its catalogue was dominated by two large sets—the four-CD Making Rooms recorded on a seven-date Mopomoso tour of England in August 2013, and the six-and-a-quarter-hour, nineteen act, digital release Channel recorded at the all-day Discovery Festival in Walthamstow, London, in September 2017—each featuring a dazzling array of improvising talent, including saxophonist Evan Parker. Unsurprisingly, recordings by Russell and Smyth, together or apart, account for the lion's share of Weekertoft releases; of the label's twelve releases to date, the only ones featuring neither of them are 2016's digital release Rev, Cook and Out by the long-established duo of Chris Burn and Matthew Hutchinson, Alex Ward's impressive 2017 studio-recorded solo clarinet CD Proprioception, and the equally fine 2018 cassette, featuring the improvising duo of tenor saxophonist Rachel Musson and bassist Olie Brice, Tapering Arms Point into the Wind. Altogether, such examples emphasise the consistently high standard of Weekertoft's output, whatever its format. That standard is maintained by the label's latest releases, both featuring the duo of Smyth and Parker. 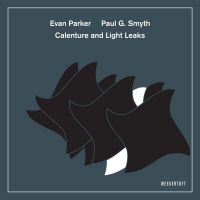 Evan Parker / Paul G. Smyth
Calenture and Light Leaks
Weekertoft
2019 This CD/digital album was recorded in March, 2015 at the Kevin Barry Room, National Concert Hall, in Smyth's home town of Dublin. (See YouTube below for concert footage.) On both its tracks, which total about forty-two minutes, Parker is featured on tenor saxophone with Smyth on piano. Piano-saxophone duos are not commonplace, but Parker has quite a few in his discography, with an impressive array of pianists, including John Tilbury, Stan Tracey, Matthew Shipp and Misha Mengelberg, to name just a few—an impressive lineage for Smyth to be joining...

The opener and title track is the longer of the tracks at thirty-three minutes. It opens gently with a series of sustained low-frequency notes from Parker which establish the early atmosphere of the piece, with Smyth adding contrasting high-end arpeggios underneath. Gradually, Parker accelerates and is drawn closer to what the piano is playing, all the time sounding fully in control. Some three minutes into the piece, the two are already engaged in a brisk but free-flowing dialogue with phrases and ideas being batted back and forth between them. Each of them plays continuously, without pausing to allow the other space for a conventional solo; in effect, they are soloing simultaneously with each being aware of the other's playing and responsive to it. Even when Parker gets locked into one of his protracted, circular-breathing solos, Smyth is still there with him, responding with an impressively gargantuan solo of his own. The two obviously understand and complement each other well.

Evan Parker / Paul G. Smyth
The Dogs of Nile
Weekertoft
2019 Given the success of the partnership on Calenture and Light Leaks, it is no surprise that this digital-only release (which early purchasers of the above recording could get free} was recorded two years to the month afterwards, at the intriguingly-named Opium Rooms in Dublin. The personnel is unchanged, but Parker sticks to soprano saxophone instead of tenor. Its two tracks each clock-in at around the sixteen-minute mark, meaning the combined duration of the two albums just tops seventy-four minutes. Although all their music could have fitted onto one CD, the distinct nature of the two dates means that there is an aesthetic logic to separating them. Fittingly, given the Anglo-Irish nature of the duo, the album title and both track titles are quotes from Dublin-born Anglo-Irish satirist Jonathan Swift's 1721 poem The South Sea Project.

"Mariner with Rapture" opens the album and immediately the soprano sax means we are in a soundscape which is a complete contrast with that above; not only is the smaller sax's pitch higher, but Parker also plays it quicker, producing shorter notes and more of them. However, the net effect differs from Parker's tumultuous solo soprano outings such as The Snake Decides (Incus 1987, Psi 2003). Maybe as a result of Smyth's playing, Parker occasionally slow things right down to produce passages that are far more contemplative and atmospheric than that brisker, bravura solo style. As on Calenture and Light Leaks Parker and Smyth work well together as a sympathetic duo. Yes, these two albums are very different, and display the pairing in contrasting lights. The albums are a complementary twosome that should be heard together... just like Parker and Smyth, in fact.

Tracks: Calenture and Light Leaks; Baffled, Standing in the Air.

The Dogs of Nile

Tracks: Mariner with Rapture; The Dogs of Nile.