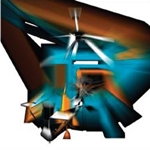 In addition to leading the unclassifiable Claudia Quintet and performing numerous sideman duties, composer and percussionist John Hollenbeck is renowned for his inimitable multi-layered writing. Hollenbeck studied under composer Bob Brookmeyer before charting a unique path in creative improvised music, incorporating elements of minimalism, post-rock and indigenous folk music into his eclectic compositions. As leader of a twenty piece Large Ensemble, he expands the sonic palette of traditional big band writing with his unorthodox approach.

Featuring a series of commissions from jazz orchestras around the globe, Eternal Interlude is the Large Ensemble's sophomore effort, following their debut, A Blessing (Omnitone, 2005). Employing a wide range of instrumental sonorities, these kaleidoscopic pieces invoke the rich tone colors and varied dynamics of contemporary classical music as much as the muscular power of the original big bands.

An aficionado of new music with a predilection for the hypnotic rhythms of the early minimalists, Hollenbeck also serves as regular percussionist for composer Meredith Monk. Sharing Monk's fascination with the endless timbral potential of the human voice, Hollenbeck employs fellow Monk Vocal Member Theo Bleckmann as the Ensemble's lead voice, who lends an air of tranquility to even the most forceful proceedings. Though the band can swing like mad, it is their masterful restraint during introspective passages that most impresses. "The Cloud" is indicative—a placid tone poem woven from a billowy mosaic of delicate flutes, somber brass and hushed voices.

Like fellow Brookmeyer graduates Darcy James Argue and Maria Schneider, Hollenbeck strives to preserve the big band tradition by infusing it with novel new ideas. Eternal Interlude is a striking example of the future, today.