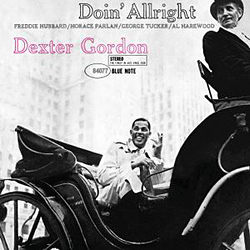 From the first track of this record—in Blue Note's 45rpm double-disc reissue series—tenor saxophonist Dexter Gordon certainly seems to be doing just fine. That opener, "I Was Doing All Right," lilts along with a nice 'n' easy, early 1960s treatment of an insistently positive George Gershwin melody. Gordon doesn't rush his solo, but allows it to intensify naturally from the surrounding breeze. He explores the entire range of his instrument, allowing his pace to ebb and flow while never jettisoning himself from the track of comfortable swing. Trumpeter Freddie Hubbard enters on—and retains—a brasher course, slashing through a stream of jagged, harmonic lines. Pianist Horace Parlan goes farther afield, injecting the tune with some passing abstract figures.

Coming back from the R&B-tinged fade with which he ends the first track, Gordon enters "You've Changed" with acrobatic flips and spirals before settling his horn into the rhythm's crackling warmth. Again, the saxophonist leaves no point on his horn's tonal spectrum untouched, all along dipping into the sugary pools of regret left by the passage of time. Hubbard traces the low, stretched breaths of drummer Al Harewood's brushes, then works the harmony and, later, moans along with Gordon as the leader makes his return.

"For Regulars Only," the first of two Gordon originals, lifts the record's spirits back to its opening contentment. Together, Gordon and Hubbard graph a sharp-toothed, yet pleasant, bop melody. Alone, Gordon's tone is bright and forceful, his lines angular and dancing. Hubbard, for whom this racing, riff-heavy tune seems tailor-made, surprises a bit by softening the edges of his blowing, rather than cutting into the listener with the expected blare. It's a relaxed, somewhat against-type approach that works to excellent effect. Parlan, for his part, operates here like a film editor, attaching several unresolved passages into a series of piano jump-cuts before the horns return to restate the theme.

Yet, despite the solid work heard throughout the first three numbers, the album's lasting value resides on what originally constituted its second side (and which here comprises the second disc). "Society Red," the second Gordon original, is a relaxed, yet powerful, blues that first hands the solo reins to Hubbard. He's in no hurry to jolt the listener, but rides the relaxed vibe awhile. Soon, however, he enters his familiar blowing terrain, spitting piercing shots to the heavens. Gordon revisits some of these volleys with a deeper, warmer sound and the occasional growl. Much as in the album's opener, he steadily builds his story, ever filling the available space with more information—more details—without ever disrupting the flow, like a boxer expertly working the speed bag. Parlan applies a soft, rolling touch, skewing the blues into an abstract take on ragtime. This nice recollection of jazz's first steps gives way to bassist George Andrew Tucker's only individual statement on the record: a loping bend to the space-time continuum.

"It's You or No One," brings all the aforementioned together to close the album. A burning bop pow-wow, it's awash with quick, flowing lines, staccato shots, trills and R&B warble. Gordon turns in what may be his best solo of the set here, augmenting the curls of his Spirograph drawing with sharp cutbacks and drooping sighs. While brief, Hubbard's sprinting effort also impresses, retaining through the speed the kind of warmth that made Miles Davis' trumpet smile. Parlan spins a spiked wheel, twirling through cyclical motifs with a cubist touch. The horns blow in to clear the field, then trade with Tucker's bass before giving way to Harewood's brief, but aggressive drum solo. Gordon and Hubbard then join forces a last time to see the album out with a final battle charge. It's a glorious send-off for an album that's rote procedure in spots, but comes on in the second half with two inspired hard bop attacks.


Tracks: Disc One: I Was Doing All Right; You've Changed; For Regulars Only. Disc Two: Society Red; It's You or No One.