BY JORDAN RICHARDSON
August 27, 2010
Sign in to view read count 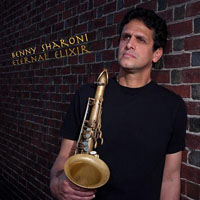 Tenor saxophonist Benny Sharoni's debut as a leader, Eternal Elixir, mixes the vitality of a spiritual journey with the intelligence of an academic lesson, to come up with an intoxicating cocktail of brains and brawn.

Sharoni is a precise and exciting player. His record is couched in the idea of music as salvation, and is largely culled from his experiences during a mandatory three-year term with the Israeli Army in the 1980s. Says Sharoni, "While I was in the Army, when I had a moment of quiet at night, I'd put on headphones and listen to Steely Dan and Sonny Rollins." With Eternal Elixir, Sharoni offers similar peace of mind with these 10 jubilant tracks.

Born and raised in Israel on a kibbutz near the Gaza Strip, Sharoni's formative years came filled to the brim with the music of his parents' homelands, with the sounds and vibrations from Chile and Yemen filling the home constantly. It was when the saxophonist heard Rollins, however, that he fell in love with jazz. After traumatic experiences in the Israeli Army in Lebanon, Sharoni enrolled in the Berklee College of Music and transformed the violence and bloodshed of his past into the beautiful noise of the present.

Sharoni's pursuit of elegance, beauty and joy is invigorating, drawing on a lovely mix of original compositions and music from Donald Byrd and Bobby Hebb. Through it all, Sharoni's group chase resplendent notes and compelling tones. The joy springs forth from the instruments, propelling the album with equal portions grace and excitement.

Eternal Elixir bounces right out of the gate with "Bernstein," a Sharoni original that teems with proud playing and gobs of enticing swing. It is, of course, inspired by composer Leonard Bernstein and serves as the ultimate invitation to Sharoni's celebration of joy and life.

Perhaps some of his mother's influence is tucked into "Benito's Bossa Bonita," a soulful bossa nova that takes full charge of its medium tempo, thanks to drummer Steve Langone's sturdy work. Sharoni sails high and drives low, all the while maintaining his instrument's sensual core.

Rhythm is the name of the game on "Pentecostal Feelin,'" with its groovy boogaloo beat. The Byrd original, featured on the trumpeter's Free Form (Blue Note, 1961), gains an emotional edge as Sharoni takes on saxophonist Wayne Shorter's part with boldness and creativity.

For Sharoni, music is a spiritual experience. Through his Eternal Elixir, he shares his thirst for life and his continuing quest for pure happiness. His story has been one of horror and adversity, but the saxophonist has managed to change that story into one of hope and love through the unyielding and unstoppable power of jazz.