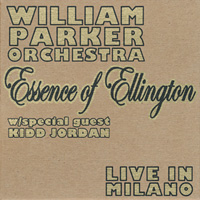 Talk to any member of the so-called avant-garde, and what is immediately apparent is a deep familiarity and love of the tradition. That's not to say that there is a desire to replicate: almost the opposite. New York City bass icon William Parker first began listening to Duke Ellington when he was seven years old. One thing he learned was not to imitate but to find his own way in music. And that comes through in spades on this double album recorded in concert in Milan in early 2011. With a cast which reads like New York's Vision Festival on tour, Parker's Orchestra tackles six pieces associated with Ellington, along with three of his own compositions.

He gives the Ellington numbers a decidedly individual, but not post-modern, slant. There is no irony. They stay in time and in tune, but stretch the boundaries with raucous interplay and exciting solos. As with Parker's Little Huey Creative Orchestra, the orchestrations are in large part self-conducted. Each section has the freedom to bring itself in and out of the ensemble at will. That could be a recipe for chaos, but so accustomed are many of the band to the leader's methods that they conjure kaleidoscopic combinations, with interlocking lines veering between counterpoint and commentary, well beyond the scope of any arranger's pen.

Particularly noteworthy among the many excellent performances are the out-of-tempo duet between tenor saxophonist Kidd Jordan, eschewing his trademark falsetto for a gruff squall, and the stuttering cadences of drummer Hamid Drake at the start of the bassist's "Portrait of Louisiana," Sabir Mateen coasting over the accelerating riffs in an ear shredding altissimo register on tenor saxophone on "Take The Coltrane," and Rob Brown's superlative a cappella alto saxophone introduction to Juan Tizol's "Caravan." Dave Burrell proves the ideal choice to fill the piano stool, with a style that encompasses stride and ragtime, as well as free. His sparkling wintry opening to "In A Sentimental Mood" acts as the perfect foil for Darius Jones' searing emotion drenched alto saxophone later in the piece.

So many of these tunes have become standards, it's almost a shock to hear renditions which feature lyrics. Acceptance or not of Ernie Odoom's vocal delivery and extemporizations is likely to be one of the main determinants as to whether this otherwise splendid set will capture the annual best of year plaudits. His voice is high in the mix and unavoidable, especially on "Sophisticated Lady" and "In A Sentimental Mood." That is due to the heavy compression that has been applied. Perhaps evidence of the session's origin as a radio broadcast, it nonetheless means that the volume level remains more or less uniform throughout, regardless of how many people are playing. Great for listening in the car, but slightly tiring at home.

That grouse aside, Parker has delivered a unique take on the Ellington repertoire which pulls of the trick of being both stridently modern and affectionately reverent.