Sabir Mateen - Alto & Tenor Saxophones, Flute, Piccolo, Bb & Alto Clarinets Composer, Arranger, Conductor, Poet The name Sabir Mateen has been one to deal with and listen to. Originally from Philadelphia (b. April 16th 1951), he moved to Los Angeles and played with Horace Tapscott and his Pan- Afrikan Peoples Arkestra and other bands. He moved back to Philadelphia in the '80's and played with two musicians he still collaborates with today, Sunny Murray and Raymond A. King, and also with Monette Sudler, Bill Lewis and many others. He also pursued studies with Byard Lancaster. Having moved to New York in 1989, Sabir became a world renowned artist and has performed with the greats such as Cecil Taylor, William Parker Ensembles (Little Huey Creative Music Orchestra & The Inside Songs Of Curtis Mayfield), Alan Silva, Wilber Morris, Jemeel Moondoc, Charles Downs (Rashid Bakr), Marc Edwards, Mark Whitecage, Raphe Malik, Dave Burrell, Butch Morris, Henry Grimes, Kali Z 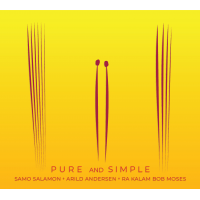 Innovative guitarist Samo Salamon always thrills with the diversity of his output. Right on the heels of his two-disc solo recording of the entirety of saxophonist Eric Dolphy's compositions,Dolphyology (Samo, 2022), come three very different releases. Samo Salamon Joy and Sorrow Klopotec Records 2022 The first a ...

Live at The Hinton House

Klaus Kugel studied at the School of Jazz in Munich. Since 1989 he has attracted attention worldwide through projects with a wide variety of artists. Over the past 30 years he has played throughout Europe, the Baltic States, Canada, USA, Syria, Japan, Mexico, Russia, China, Ukraine, Azerbaijan and Israel. This selection of his music focuses on ...